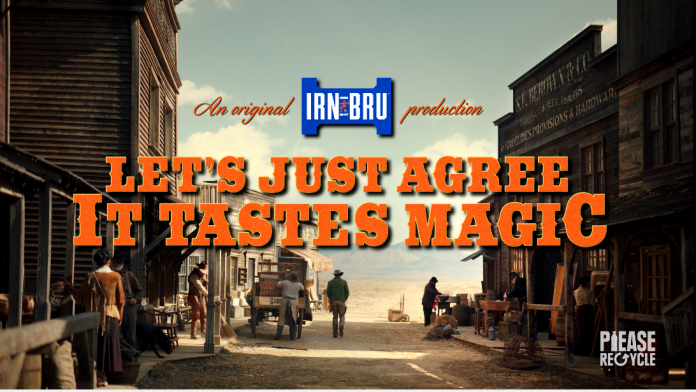 For decades IRN-BRU has been described as “indescribable” – but now it’s challenging the nation to put their taste buds to the test and pinpoint the “BRU-nique” flavour of the iconic Scottish soft drink.

The UK-wide challenge is in celebration of IRN-BRU’s latest TV ad, which airs from Tuesday 13th July and forms part of the £6 million investment in IRN-BRU. The heavyweight campaign will clearly differentiate IRN-BRU from all other carbonates and will be spearheaded by this new advert – set in a wild-West saloon. The campaign will run across a number of media channels, including TV, digital and social, reaching 90 per cent of 16-34 year olds in Scotland and the North of England.

IRN-BRU’s  the taste is often a hot topic of debate: bubblegum, tutti-fruity, orange, or cream soda; no one has ever quite managed to put their finger (or tongue) on the exact flavour.

Which is why the popular soft drink has launched The Great Taste Debate – challenging the public to grab a can, take a sip, and tell them what flavours they detect via social media.

And, to sweeten the deal, IRN-BRU will give one lucky fan a year’s supply of their legendary fizz for the best tried-and-tasted video (T&Cs apply).

“Whether it’s bubble gum or tutti-fruity, IRN-BRU fans can never quite agree on the exact taste of our BRU-nique soft drink,” said Adrian Troy, Marketing Director at AG Barr. “Naturally, we decided to have a bit of fun with this. Whatever the flavour, hopefully we can all agree on the fact IRN-BRU tastes magic.”

As well as airing on TV across the country, the ad can be viewed by scanning QR codes found on cans and bottles throughout the UK.