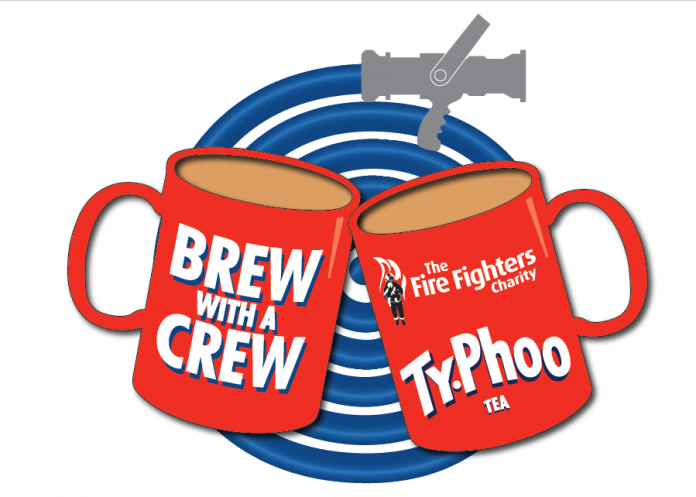 Typhoo Tea today announced a three-year partnership with one of the UK’s emergency service charities, The Fire Fighters Charity, to help to raise awareness of its ongoing work with active and retired members of the fire and rescue services across the UK.

Their first joint campaign, Brew with a Crew, will encourage shoppers to pick up some Typhoo, pop the kettle on, grab their crew and have a brew in aid of The Fire Fighters Charity on International Firefighters’ Day on May 4th and throughout the spring and summer.

The Brew with a Crew campaign will give consumers a chance to bring their own crews of loved ones, peers or colleagues together, in a COVID-secure virtual way, for a brew and a mindful moment of calm and reflection. It also aims to raise much needed income to support the physical and mental health of the UK’s fire services community, as they continue to work around the clock to keep the nation safe.

To take part, Typhoo Tea and The Fire Fighters Charity are asking consumers to say ‘OO Please to a brew and to support the charity by visiting www.firefighterscharity.org.uk/brew and completing the online registration form. They will then send out a Brew with a Crew fundraising pack featuring ideas for activities, biscuit recipes and other downloadable content to help you promote and decorate your event.

Donations from participating crew members can be given digitally by either using and sharing the QR codes in the fundraising pack, creating an online fundraising page, or by texting CREW to 70660 to give £5.

Alan Knell, The Fire Fighters Charity Corporate, Community and Events Fundraiser said: “Tea is pretty much the foundation stone on which the fire service is built, you can’t set foot on a fire station without being offered a brew.”

“We’re proud to have formed this partnership with The Fire Fighters Charity,” said Des Kingsley, CEO at Typhoo Tea.