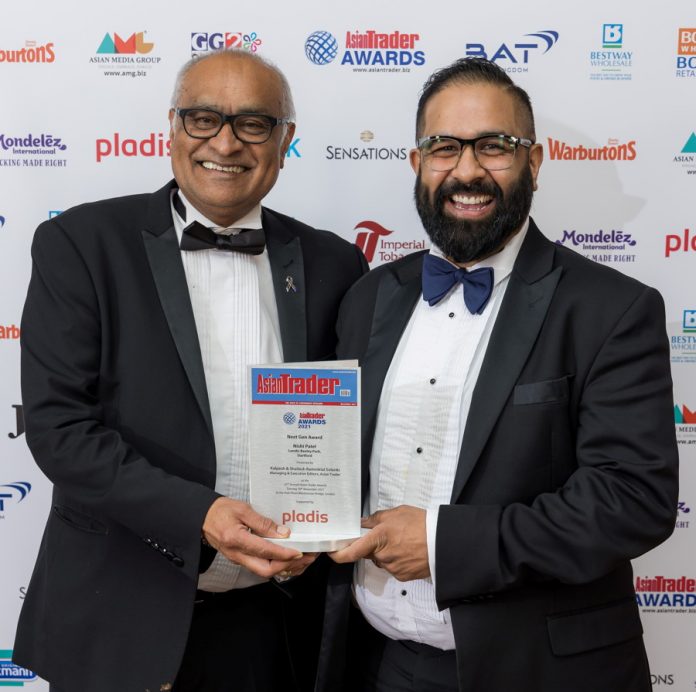 The pioneer generation of UK Convenience is now at or beyond retirement age, but their love of independent retail, their skill as merchandisers and their importance community figures, are often manifested in their daughters and sons who have carried on in the trade. Nishi Patel, who runs the Londis Bexley Park store in Dartford, is one such retailer, who actually bought the shops from his father, Kiran, who has been in retail for over four decades.

Nishi, the winner of the Asian Trader Next Gen Award, supported by pladis, says retail is in his blood.

“My parents have always had shops, my uncles had shops. So, I’ve literally been around shops all my life. It’s always been a part of our blood. My dad owned several shops in the 1980s and 1990s. And then he owned two shops before he sold them to me. One shop he’s had for over 35 years, Bexley was around 15 years old when he sold it to me,” he says.

The shop is around 2000 square foot, located just off the main roads A2 and M25, and sits at the heart of the community.

“We have got five schools around us. We have got a couple of thousand houses in the back, estate flats and houses. We have got a gym next door, we have got two offices. We have also got a hospital for mentally disabled people, so a lot of staff, nurses, helpers, carers are coming from there,” he tells us of the area.

Despite growing up in shops, Nishi initially took a detour to the US, after graduating in structural management. He lived in Florida for about three years, on and off, working in the construction industry. But then the subprime crisis happened, in 2007, and he came back and started helping his father with the shops and got into retail in that way.

Third generation of shopkeepers, he follows his ‘old school’ father in ensuring a super clean, well lit and well stocked shop, but goes further to keep things fresh and update constantly, to make them a destinations shop.

“I have been bought up by the best mentor in retail. But it hasn’t come without some challenges and disagreements,” he says. “My father is very old school when it comes to retailing which isn’t such a bad thing as some things never change. The three key areas that has always told me to ensure is always right are super clean shop, well lit and well stocked.”

They took a refit of the store three years ago, with both of them bouncing ideas off each other, and Nishi say the collaboration really shows a bit of them both.

“The lighting was all down to him on what he wanted with a little of my word in his ear about energy efficiency. I feel a well lit store makes your shop look clean, fill up, tidy. So I have spent big money on my lights, getting Halo lights in, which I think visually makes a great impact. They are low emission lights, so again, for energy efficiency, they’re great, especially with the energy crisis at the moment.”

He took on the food to go area and made that his babe in store.

“The main difference between us is that I want to bring new and exciting products to our shop to make us a destination shop and a place where people know we do thing differently to any other convenience store in the area.”

He has introduced f’real milkshakes and American sweets and drinks since he took over in October 2020, which flew off the shelves, and is currently in the process of redesigning the food to go area.

Food to go has been quite big for them and they have managed to increase sales over the last few years, even during the pandemic when restrictions affected food to go sales for most stores. Nishi says the refit helped much in this.

“We added different machines, different products, different new lines, we added Rollover, f’real in the last refit. We also added a new hot stand and a new coffee machine that also helped up ourselves in that area,” he says.

“So now what we want to do is try and streamline what we do in a better area. We have actually got rid of a lot of ambient cakes, and we have condensed it down now so we can get the new machines in.”

They have seen sales skyrocketing, like many of the local stores, during the pandemic. While the grocery market data shows that the convenience channel is going through declining sales year on year, albeit from a strong comparator, especially since the restrictions eased, Nishi says the opposite is the case for them.

“We actually increased our turnover after the pandemic. We have stayed up from pre-pandemic to pandemic. And from then we have actually continued to grow. Last year was our best year ever, and we may even have a better year this year than last year,” he says.

Nishi feels the pandemic helped them show customers what they can do in store.

“A lot of customers rather stick to big supermarkets. For us, I think, once they saw how we work, how we sold our products, you know, we didn’t inflate our prices by any means, we tried to get premium lines in if we couldn’t get cheaper lines in, during the pandemicwe had flour, we had yeast – it seemed at the time we were the only store in Kent with flour and yeast – we had people coming from the coast to come and see what we’re doing in store,” he explains.

He stresses that the availability – and the lengths they have gone to keep the shelves stocked, searching high and low for essentials – has made a big difference.

“People would at that point rather come to us because they weren’t having to wait outside the supermarket for two hours just to get inside to be told ‘we currently have none of them’, where they can come to us and get into store straightaway within five-ten minutes,” he says.

“We still carried on doing social distancing, and only a certain amount of customers are allowed in the store at any one point. But customers understood. And yeah, we just got a nice influx of new customers, new faces that we never would have had pre-pandemic.”

Nishi says the help from his father during the crisis has been invaluable, opening his eyes to what to do in a crisis and how best to adapt to it.

“For example we could not get egg boxes but we could get eggs from Brakes, we had no clue how we would sell them, so dad went off to Booker and found us reels of plastic bags, so we bagged the eggs and this worked out great,” he says.

He also has to tread a fine line to keep his father safe at the time.

“He’s an older gentleman with some underlying health issues. So for me, it was a very fine line of ‘okay, yeah, come but just be careful, wear your mask, don’t go on the shop floor too much. If you want to go to a cash and carry, no problem, again, take hand sanitizer.’ So it was hard. It’s hard for him to keep away, for one, and it was hard for me not to get a bit of his wisdom and help in certain lines. It was invaluable, but a bit scary as well at the same time,” he adds.

Home delivery is another pandemic trend they seized and got a firm grip of, and Nishi says they wouldn’t have probably done it if it wasn’t for the pandemic.

“We joined Uber Eats and Deliveroo and we are still in discussions whether we’re going to do Snappy Shopper. It was just another avenue for us to get products to our customers. We found that invaluable,” he says.

They have, in fact, transformed the online delivery platforms as another tool for customer engagement, ensuring loyalty to the store and getting all-important feedback on their ranging.

“We told our customers ‘look, if you need something and you can’t see it on it, give us a call, wait five minutes, and we’ll stick it online for you.’ So that actually helped grow our database of products to sell and what products to sell online,” he says.

They have a 500-600 lines on both online platforms. “We have got quite a good virtual store on there,” Nishi quips.

They are very active on social media, with Facebook posts and TikTok videos, and combined with delivery platforms, this enables them to promote the store to a much larger customer base.

“I think its two things,” he says. “One it’s been fun and it’s good for the customer to engage in a different way, rather than being in-store and talking to someone. And I think it’s a must, because it makes us unique, in the sense of we get to pump what we’re doing in everyday life in the shop into the customers- new product bases, new lines of products that we want to try.

“And it just gives us a bit of a base to help us know what to sell, and what’s changing in the ever-changing market, like vapes and stuff like that.”

With disposable vapes surging in popularity, he says it’s the category to beat at the moment, and he is all set to put a vape station in-store in the next weeks.

“We have probably made 5-6 times the amount of turnover on our vapes in the last six months, and it seems to have gone crazy! We never thought we’d hit targets that were hitting now,” he says, adding that vapes have overtaken their beer and wine sales, now standing behind tobacco and fresh fruit and veg among their best-selling categories.

Nishi adds that it’s important to be always in tune with the market. “Like I said, it’s ever-changing so quickly that you have to be on top of your game to get new product releases in quickly,” he says.

Apart from trade magazines, he uses his peer group of retailers to pick up new trends and products. “We have got a really great network of retailers on our WhatsApp groups and stuff that helps,” he says. “Sometimes we have asked guys, and if we see one retailer doing it, well, we always feel that we can do it just as good or as better as them.”

As the cost of living crisis impacts shopper behaviour, Nishi feels that retailers might need to find the fine line, as there could be shoppers for products at both ends of the price spectrum.

He says he is not going to delist all his high end lines. “I am actually going to try and increase my high end wines, some of the nicer chocolates. Again, why I’m getting Tango, it’s an impulse feel good drink. You know, it’s not cheap, it’s a premium drink,” he adds.

Of course, there will be people who will be trying to scrimp and save, he notes and they have just introduced Jisp vouchers to help customers save a bit of money on their everyday goods.

“So we are looking at both sides of it,” he says. “People will shop to find a better price and a bit of value product. And with that, they might look at actually buying a premium bottle of wine to make themselves feel better as well. So it’s trying to find the fine line.”

And, that’s the case with the prices as well, he adds.