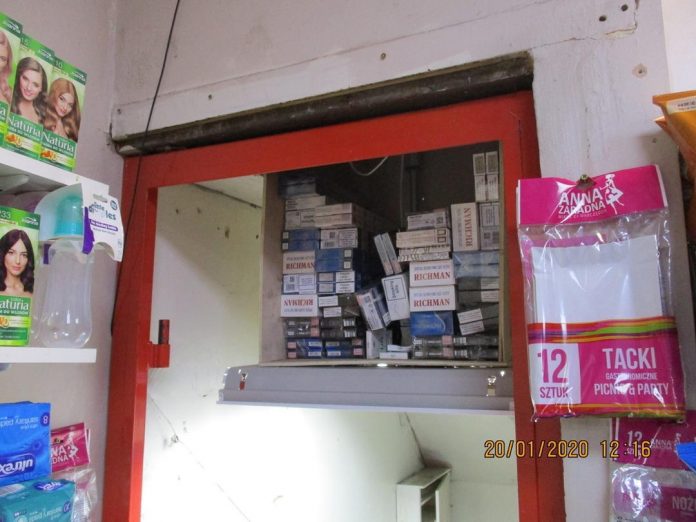 The owner of two Bradford shops used a number of secret compartments, including a remote controlled hydraulic chamber, to hide the counterfeit tobacco that he sold to boost his business.

Giedrius Linkevicius pleaded guilty to a string of charges related to the sale of counterfeit cigarettes when he appeared at Bradford Magistrates Court on Tuesday.

Linkevicius, Director of Leo Food Stores, ran two shops, 7 Days store on Sticker Lane and Eko Polski on Legrams Lane, and the court heard that he sold the counterfeit cigarettes because many of his Eastern European clientele did not wish to purchase full cost, legal cigarettes.

The case was brought by Bradford Council and West Yorkshire Trading Standards – which had uncovered thousands of pounds worth of counterfeit goods during raids on the two stores.

Both shops were well known to Trading Standards, with the service having received many complaints over the years about the premises supplying illicit and duty free tobacco.

The court heard that Trading Standards had first visited Eko Polski on January 2018. They found counterfeit cigarettes, and issued a warning to the business, as well as advising them on what could and could not be sold.

In January 2020 they returned. A test purchase found that the store was still selling counterfeit cigarettes. A raid several days later led to large amounts of illicit goods being seized.

The court heard that cigarettes were found hidden in various locations.

There was a hidden compartment beneath a light on a stairway leading to a cellar. When a remote was pressed a hydraulic piston lowered the compartment so the contraband could be accessed.

Another hidden compartment was found behind a paper towel dispenser in a kitchen area.

Officers seized over 18,000 illegal cigarettes and 13 pouches of illicit tobacco.

A further 9,000 cigarettes was found in a flat above the store.

Linkevicius, 33, or Legrams Lane, took on his second shop, 7 Days store in September 2019. By October that year Trading Standards had received complaints about illegal products being sold there. An inspection found counterfeit cigarettes at the store.

The court heard that the goods had been smuggled into the country, and were not declared, meaning no duty was paid on them.

Because of this they did not feature statutory health warnings.

That store was re-inspected on January 15 2020 and found to still be selling illicit cigarettes. It was raided a few days later.

A similar set up of hidden compartments were found in that store.

Mr Ayub, defending, said Linkevicius had come to the UK in 2006, and had worked hard since he arrived.

Eko Polski was already selling counterfeit cigarettes before he took over – the court was told.

Mr Ayub added: “As far as he is concerned it has been a very expensive lesson to learn.

“He is a man who came into this business with little or no experience. His experience of retail was almost non-existent. He was offered an ongoing concern and he thought it would be simple. The picture of a thriving business was not what he found when he began to operate the shop.

“His position was simple – he was trying to keep the business going. He tried to provide for the existing customers of the business. These customers were wanting certain products, in particular the cigarettes mentioned.

“The reality is that people coming into the shop, especially from an Eastern European background, and I don’t mean to stereotype, but they ask for a particular type of cigarette.

“Cigarettes that are sold in this country attract a duty. A lot of people who come into the shop know that in Slovakia they can buy cigarettes for £2/3 – much cheaper than the UK. Buying the same product for a much higher price is something many can’t understand, and demand is created for these other cigarettes.

“He knows you are not supposed to sell these cigarettes, but the majority of customers were asking for a certain type that were just £3.50 a pack.

“It is not a choice of offering something people want, it is offering people something that is illegal, and this is something he now understands.”

He said taking on a second store was an attempt to move into a new market, but again fell into the habit of selling illegal cigarettes.

The court heard that he was no longer involved in Eko Polski, which had been taken over by another individual.

He was no longer selling counterfeit cigarettes at 7 Day store.

Presiding Justice Glen Armstead said: “This has obviously been a very expensive lesson you have learned today.

“You took the business on as an ongoing concern, but you could have stopped the sale of these cigarettes, but you didn’t.

“You knew it was wrong but you carried on. You concealed them in quite a sophisticated way, with ceilings coming down and walls pulling out.

“Unfortunately for you, you were caught.”

He was given a community order consisting of 100 hours of unpaid work and was ordered to pay £3,200 costs and a £90 surcharge.