Julie Kaur, who runs Premier Jules Convenience Store in Telford, has won the Spirit of the Community Awardat the 2021 Asian Trader Awards.

The 33rd edition of the awards, which celebrates excellence in the UK’s convenience stores, was held on Tuesday 30 November at Park Plaza Westminster Bridge, London hosted by noted impressionist Rory Bremner.

Business Secretary Kwasi Kwarteng has graced the event as chief guest, with leading politicians and captains of industry joining in to herald independent retailers, convenience store and symbol operators, shopkeepers, off-license owners and newsagents from across the UK.

Delivering his keynote speech, Kwarteng said: “I have to say to the companies and  business leaders represented here tonight that you have shown a spirit of sacrifice, and huge amounts of real leadership in your communities. And that’s why I wouldn’t miss this event for the world.

“It was retailers, day in day out, who were bearing the brunt of the risk, who were working, in many cases 20 hours a day, to keep people going and to make sure that essential goods and services were provided. And my only word is thank you. You probably don’t hear that too often from government ministers.

“But from the bottom of my heart that is the most sincere, heartfelt message, because it’s been a terrible time, for so many people in lots of different communities, and without your support, without your unstinting effort, things would have been a lot worse. So thank you very much on behalf of everybody in this country.”

The Asian Trader Spirit of the Community Award, supported by Mondelez, recognises a store which is truly at the heart of its community, going beyond the call of duty to help customers and the neighbourhood.

Running the store for 30 years, community has always been very important to Julie who cherishes the loyalty and support of her customers. This year, she has completed 30x10km runs to mark her 30th anniversary as a retailer, raising funds for three charities.

She has committed to running 50 x 10km races by next year, when she celebrates her 50th birthday, to raise funds for another three charities, including Age UK, where she serves as a trustee. Julie is also heavily involved in the local Sikh community, covering all the funerals during lockdown.

The Judging Panel said: “A helluva driven woman – 49 last year, Jules started working with Age UK and committed to running 50 x 10 km races in her 50th year with all proceeds going to charities.” 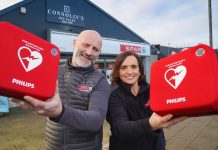