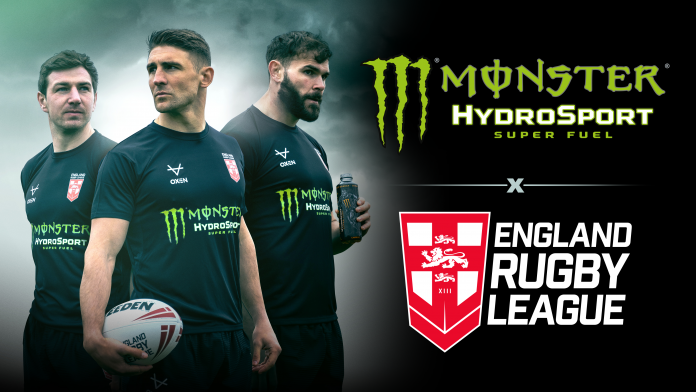 Monster HydroSport has announced that it will become an official partner to England Rugby League’s Men’s, Women’s and Wheelchair teams.

Monster’s latest high-profile sports partnership comes ahead of the 2021 Rugby League World Cup in England, taking place in October, where England’s Men’s, Women’s and Wheelchair teams will be looking to triumph on home soil.

The partnership will see Monster HydroSport launch an on-pack promotion giving consumers the chance to win tickets and be supported by in-store activity to help retailers tap into the excitement in the run-up to the tournament.

Monster HydroSport branding will also feature on the shirts of all the England players in the build up to, and during the World Cup to raise awareness of the brand.

“We are delighted to announce this significant deal with Monster HydroSport,” said Chief Commercial Officer of The Rugby Football League, Mark Foster. “They are renowned for their relationships with high energy sports and we believe this is a perfect fit for Rugby League.”

“This is great news for all three England teams that we will be able to work with Monster this year. Having taken part in the promo shoot I can see how excited they are to be working with us,” added England and St Helens player, Alex Walmsley.