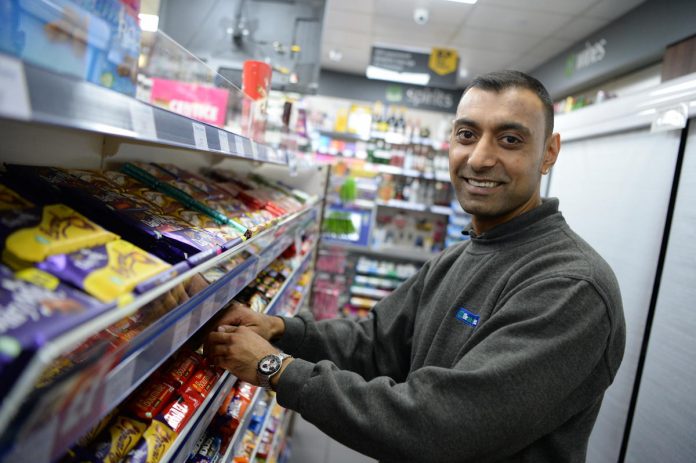 A mad-house. It’s a Lifestyle Express and the customer-space is 900 sq ft, Unitas now, used to be Landmark. What happened was I started from scratch, broke away from the family and took a massive gamble on this place. Landmark and John Farrell helped me with a full refit and everything else and the guys there became real friends. Anyway, my store: I would say it is small but neat and tidy, as we say in Glasgow.

It’s fifty-fifty, working class and unemployed, to the south of the city centre, with both private houses and council estates, half and half. It’s residential not commercial but we do have a school. We get some passing trade as we are just off the main road, and we do sit on another major road on a corner, and we’ve got a parade of four shops here, a butcher, café and soon a salon, which will attract other customers to come and follow in here.

I’ve been in shops since the age of four, so 36 years! My parents started off in convenience and then when I started working in there it was an off-sales. Then we went back into convenience and that’s when I really took a hold of it, in the early 1990s. I did everything in the shop, from A to Z, from a very young age – in all honesty I never attended school! I think I always knew where I was going to end up.

What is the best and the worst thing about the job?

The best thing about the job is the satisfaction you see on customers’ faces, especially when you do what I did here, because when I overtook here it was an absolute horrendous dump, a mess, dirty and run-down. We shut for six weeks and I think we lost some customers, but when we did open the doors again and they walked back in, the look on their faces was wonderful to see, and that’s what keeps you going. The worst thing is people not listening or following instructions, namely in the pandemic, when I’ve got big red arrows on the floor – I think one out of ten people flows the stickers!

Supermarkets and the government. We feel as small retailers that the government is trying to take the breath away from us. Look at the re-cycling thing. It’s small things like that and the supermarkets don’t seem to be getting hit with anything. But who were the ones who were here during the pandemic that supported the locals? It wasn’t supermarkets, it was the indies.

To a certain degree. I would give them just pass-marks and no more. Again, I think the suppliers focus more on the supermarkets than on the local retailers.

We are quite big in alcohol. I don’t know if you know about when the Mad Dog [MD20/20 – an American fortified wine] trend started, but it’s quite popular up north. And when they bring out crazy flavours – they brought out Electric Melon – shopkeepers were buying it to try it out, and it was OK. Then all of a sudden it just went viral, and then you couldn’t even get it. After two months, when we finally got the product in, you could put it out and within three or four minutes the shelf would be empty!

How do you get up to date information on new products?

We are part of a cash-and-carry committee – there’s six of us – and when we have our meeting every three weeks, if there is a new product out or a launch upcoming, obviously the cash-and-carry guys get to know about it and they’ll tell us in that meeting. And then we put the word out through text groups. The trade press is huge but not everybody reads it – they choose not to make time to take five minutes out and look through a 20-page magazine.

It’s huge. When the sun comes out here you can probably see an increase in sales daily by five per cent. Yesterday was 29 degrees here, sweltering, and sales were up five or six per cent. Events make a huge difference as well.

Do you get the support you need from the local police force?

In all honesty I’ve never had to use them. There’s a hell of a lot of crime around, but I think it’s how you react to it and handle the situation. I’ve never called the police out, but they have been in to see CCTV – “We’re looking for this individual”. In previous years, in other premises I have, but not in six years here. Give a shoplifter a wee slap in the ear, you’re good!

Don’t be scared, take a chance. Go with your gut and don’t be afraid to try new things, gamble whenever you need to. Something might work for one person and not another, so try different things because until you try you won’t know.

The favourite’s got to be soft drinks – I take great pride in my soft-drinks chiller, but in all honesty I take pride in every single shelf in the store. Everything has to be perfect and face-forward, with the description there, and not a speck of dust on the shelves. People say I’m OCD, but when a rep or someone walks into the store they always say they’ve never seen a place like this.

Advice-wise not much, because every premises is different, and they know best what works in their area and their store. But they could help us a lot – cut us some slack and let us have some of the big packs people can buy in supermarkets, lie a 12- or 18-pack of crisps.

Do you ever have customers asking for products they have seen on TV that you know nothing about?

Yes! I’ve had a couple. And then the very same night I’ve gone home and put on the telly and there it is!