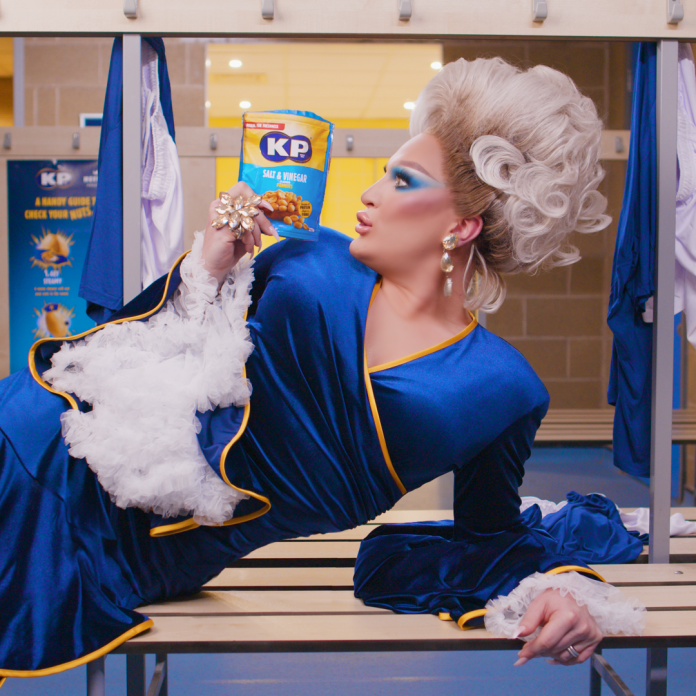 KP Snacks has announced the launch of a new campaign, running as part of its continued partnership with health charity Movember. The nut brand will use its consumer awareness and scale to get more people talking about testicular cancer.

The Queen of Drag and winner of season one of RuPaul’s Drag Race UK, The Vivienne, will act as KP’s campaign ambassador, featuring in scroll-stopping video content to encourage those with testicles to check their nuts. The hilarious social content sees The Vivienne bursting into a changing room of footballers to their shock, telling them it’s time to check their nuts for signs of anything unusual as the best place to do it is after a warm shower.

The content is humorous, before sharing self-examination guidance, with the main message being “Whoever you are, if you have em’, check em’”.

Testicular cancer is the number one cancer among men, with around 70,000 diagnosed each year, yet 62 per cent most at risk don’t know how to check themselves.

“We are extremely proud to be working alongside Movember for another year,” said Jenny Blanco Barcia, KP Marketing Manager. “KP is the UK’s most well-known and best loved nut brand, and we want to use our brand awareness to help raise awareness of testicular cancer and get people talking as there can be a stigma attached to talking about it.

“The Vivienne’s sense of humour and appearances on Ru Paul’s Drag Race UK makes her the perfect ambassador to tell people ‘Whoever you are, if you’ve got testicles, check them’ as if caught early, there is a 95 per cent chance of survival. The campaign aims to educate those with testicles on the importance of checking their nuts, and we encourage our consumers and retail partners to do just that.”

KP is the number one brand in nuts, more than six times bigger than the nearest branded competitor, growing +12.3 per cent (to £82.3M RSV).