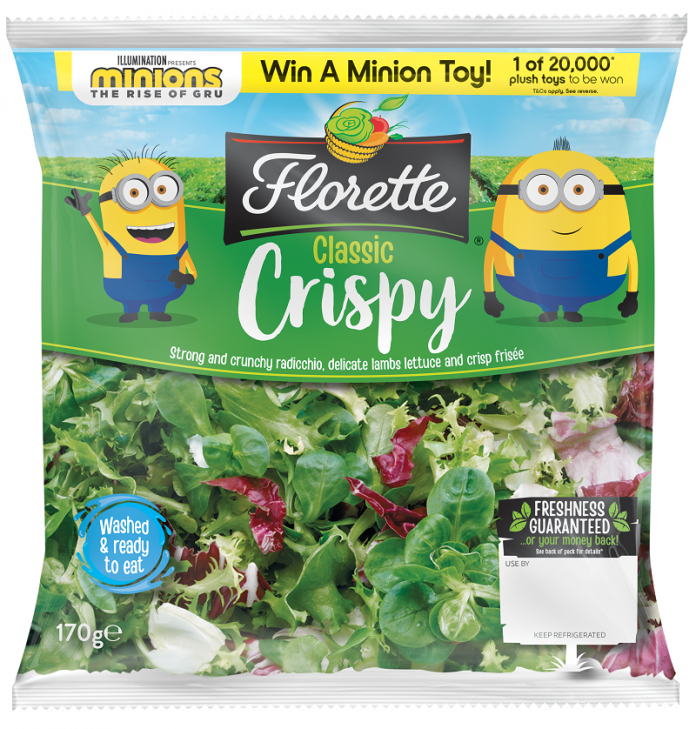 Florette has announced a major on-pack partnership with the world’s biggest animated franchise, ahead of this summer’s release of Illumination’s much-anticipated film, “Minions: The Rise of Gru”.

Teaming up with Universal Brand Development, the on-pack promotion will see the iconic Minions featured on over 13 million packs of Florette Mixed, Classic Crispy, Baby Leaf Trio and Sweet & Crunchy, providing standout on shelf with branded SRP and in-store activation there to generate additional impact and theatre. Shoppers will be in with a chance of collecting one of 20,000 Minions plush toys.

“Minions have become a global phenomenon, so it is a privilege to have these mischievous, iconic characters embellish our packs,” said Nick White, Florette’s Head of Marketing. “It’s a really exciting partnership which presents a great opportunity to connect consumers with the Florette brand whilst bringing some fun and energy to the fresh produce category.”

The limited edition co-branded pack designs will roll out from 16 May in readiness for the cinema launch on 1 July, with the film heavily supported across all media platforms throughout the summer.

The Minions collaboration will be supported by a heavyweight social and PR campaign, giving consumers the chance to win a family trip to Universal Studios in Orlando.

The partnership kicks off a £1m investment in the Florette brand this year that will include ATL, shopper marketing, PR, social media and recipes to inspire shoppers.