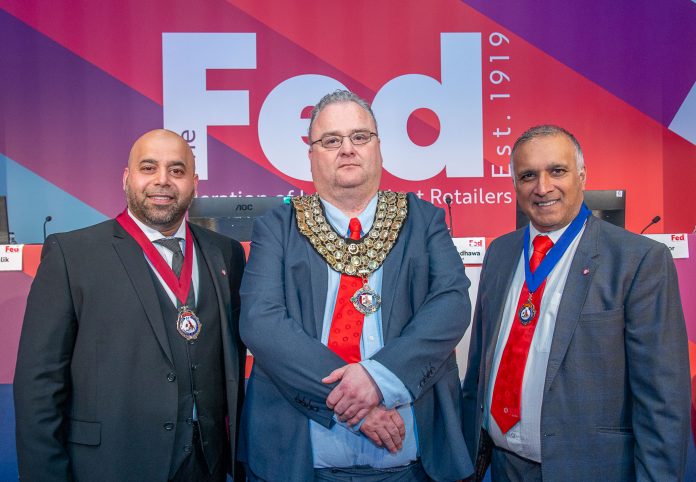 County Durham retailer Jason Birks has been elected as the new National President of the Fed (Federation of Independent Retailers).

Birks took over the chains of office from immediate past president Narinder Randhawa at the organisation’s annual conference, held in Birmingham, on Tuesday, June 21.

Birks has lifelong experience in independent retail and has held a string of high profile positions within the Fed, both at district and national level.

Having represented the Durham branch in several roles, eventually becoming district president in 2012, he later became a national councillor for the Northern district and a member of various national committees. He has also served as national deputy vice president and national vice president over the last three years.

After starting out running his current store with his wife Fiona on behalf of his parents at Mosci’s Convenience Store, in Horden, Co. Durham in 1993, he joined the NFRN in 2005 when he took over ownership of the store.

“My parents were members and, as part of the change of ownership, I had a visit from a Federation officer. She went through all the benefits of being a member in terms of the news side of the business and services such as free legal advice, along with all the other great benefits the Federation offers its members,” Birks said.

“At the time, we were members of the Hartlepool branch, but I moved over to the Durham branch and started attending the meetings. I met up with some great fellow retailers and realised that I could take something back to my business, such as a bit of advice on local suppliers or tradespersons that other retailers had used and would recommend and picking up ideas and tips that could benefit my business.”

In his acceptance speech to delegates at the Fed’s annual conference, Birks said, “I look forward to moving into a period of stability and strategic planning for the long term future of the Federation,  for our members and also the staff who do fantastic work on our behalf.

“It can be a bright and exciting future, but it is in your hands to embrace and move with the changes. We have made some adaptations over the years but I believe we need to do more. But rest assured,  nothing will be done without clear, open and transparent debate and discussion at all levels.”

As for the future of the Fed, Birks has a clear vision of the direction it should go in.

“We have made some great progress over the last few years and my main aim is to keep this progress on track and make the Fed the absolute go-to resource for the independent retailer,” he said.

“It’s all about putting money in members’ tills, growing the membership and adding even more relevant services for our members, so it’s an easy sell to prospective members.

“By increasing the membership and understanding what the grass root members want, we can provide more special offers that they can’t get anywhere else. We are a paid for membership, and we must offer value for money to our members.”