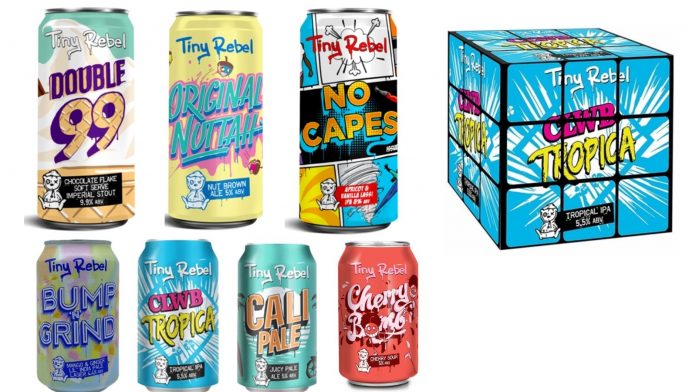 The Independent Complaints Panel of the Portman Group, the alcohol industry regulator, has reviewed eight products from Welsh brewer Tiny Rebel, the highest number of complainants for products considered from one company.

The Panel found five to have a particular appeal to children, and said they were especially concerned by designs that featured cartoon characters, made prominent use of Tiny Rebel’s bear logo or were themed around products popular with children such as sweets and 99 ice creams.

In addition, the Panel also considered a wide range of other concerns under the code.

The Panel ruled that the name Original Nuttah, in conjunction with the imagery on the can, was likely to be taken as a derogatory reference to mental illness and was likely to cause serious offence. It also considered that the product name Bump ‘n’ Grind suggested a direct association with sexual activity. On Cherry Bomb, it said elements associated with soft drinks, such as fruit or sweetie flavours and cartoon-like illustrations, can overwhelm ‘alcohol’ cues and prevent the product from communicating its alcoholic nature with complete clarity.

In total, six products were found to breach at least one rule whilst all complaints against two products, Cali Pale and Clwb Tropica’s 330ml can, were not upheld.

“Tiny Rebel’s product range has had problems across a range of areas, but in particular with designs that have a particular appeal to under-18s although this has not been its intention,” Nicola Williams, chair of the Independent Complaints Panel.

“It is essential that alcoholic products are aimed squarely at adults and clearly communicate their alcoholic nature. Equally importantly is the need to avoid widespread offence, particularly around mental health.”

Portman Group said the Newport-based brewer is working with its Advisory Service to resolve concerns with some of the products which have been upheld.

Prior to all the Panel’s decisions being made, Tiny Rebel voluntarily chose to discontinue Bump ‘N’ Grind, Cherry Bomb, No Capes and Original Nuttah.

“At Tiny Rebel we take all consumer complaints very seriously, as well as our wider social responsibility. We build in continuous quality at all levels which includes branding and promoting our beers,” a spokesperson for Tiny Rebel said.

“We’ll continue to work closely with the Portman Group and are committed to following their guidance. We’re delighted that they have confirmed that our Clwb Tropica IPA and Cali Pale Ale products are both fully compliant.”

Tiny Rebel’s brand Cwtch had previously been found to breach the Code in 2017 and 2019.