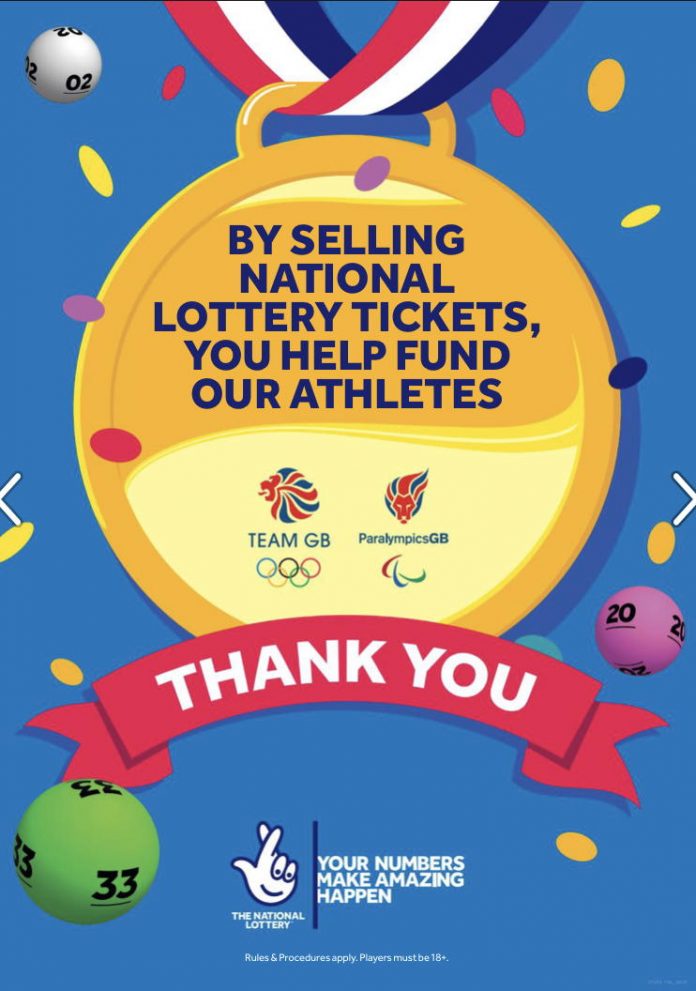 Camelot has announced the launch of a huge new National Lottery campaign that reminds players that, every time they play a National Lottery game, they’re helping Team GB and ParalympicsGB athletes in Tokyo.

A new blockbuster TV ad, premiering in a 30” spot during England v Denmark, tonight (7 July) will kick off the campaign, with further primetime ad slots scheduled throughout the week – including during the Euro 2020 Final on Sunday.

The campaign will also feature an unmissable retail presence over the course of the summer – with Olympic-themed POS landing in store from this week and a host of special games, including a limited edition Win Gold £1 Scratchcard (complete with a gold dispenser flash) and three special event Lotto and EuroMillions draws.

Camelot said the draws will give Lottery retailers plenty of opportunities to bolster sales – and benefit from an expected sales uplift of 39 per cent for the Lotto ‘Must Be Won’ event draws and 46 per cent for August’s special EuroMillions draw.

In addition, National Lottery retailers will also have the chance to look the part in the campaign, with Camelot sending out over 92,000 pieces of Tokyo merchandise – including fleeces, t-shirts, gold pens and wristbands – to retailers across the country to get them involved in the best possible way.

Camelot will also highlight the contribution that the retailers have made to TeamGB and ParalympicsGB in special advertising across digital and print, with the ads carrying the strapline ‘By selling National Lottery tickets, you help fund our athletes.’ There will also be a special bonus event, running via the National Lottery Retailer Hub.

Jenny Blogg, Camelot’s retail director, said: “We’re excited to be launching such a massive campaign ahead of the start of the Tokyo Summer Olympics, and in recognition of the significant contribution that National Lottery players and retailers have made to the success of TeamGB and ParalympicsGB athletes over the years. Retail will play a key role in this campaign activity and we’re expecting strong sales over the summer – thanks to the special games, unmissable in-store POS and special Tokyo merchandise.