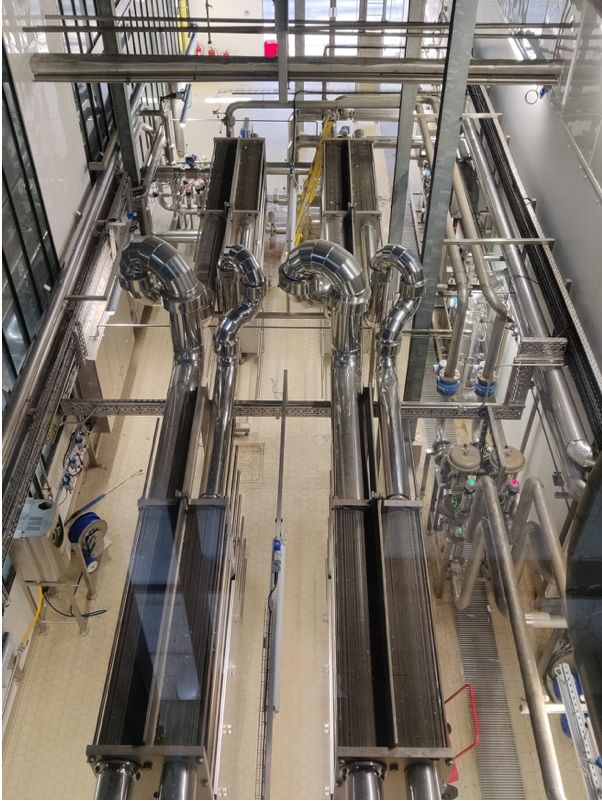 Budweiser Brewing Group UK&I has announced the installation and operation of the world’s largest wort cooler at the Magor Brewery located in South Wales, one of the largest breweries in the UK.

During the production of beer, unfermented wort, or the bittersweet sugar solution obtained by mashing the malt and boiling in the hops, is required to be cooled down prior to fermentation. After the energy-intensive stage of the brewing process, the hot wort must be cooled from 100°C down to approximately 10°C.

The new wort cooler at Magor Brewery will chill 3 million pints of beer each day.

With a surface area the size of a football field, the new wort cooler is four-times the size of a standard wort cooler in a similar scale brewery. The company said the new equipment has resulted in about a 6 per cent reduction in energy usage at the site.

“Step change improvements in energy usage are rare in our already efficient brewery and this project enabled us to achieve one of those rare occasions by taking us a big step closer to net zero emissions,” Dale Jones, technical services manager at Magor Brewery, said.

Additionally, to unlock the potential of green energy, the team at Budweiser Brewing Group is exploring the deployment of zero emission green hydrogen at Magor Brewery. This project envisages hydrogen production facilities that will include a battery, hydrogen storage unit and a hydrogen refueling station used for HGVs.

AB InBev, parent of Budweiser Brewing Group, said it has plans to install the new wort cooler in three additional breweries this year with a longer-term plan to install a similar design up to 100 breweries over the next few years.

“Sustainability has always been a fundamental part of our company. From sourcing over 70 per cent of our global electricity volume with renewables from solar and wind power, to the ambition of having the first European net zero brewing operations at scale by 2026, we are creating local change.”