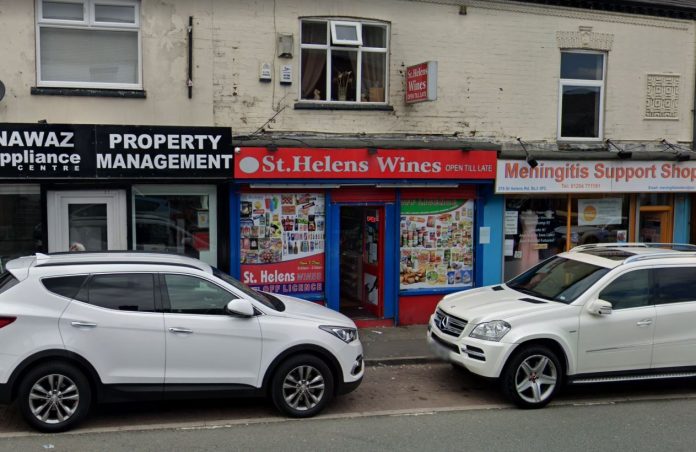 A shopkeeper has lost his licence after illicit tobacco was found at his store after it was handed over to a potential buyer.

St Helens Wines in Bolton is set to close following the council’s decision to revoke the owner’s premises licence.

Jamil Nasrou told authorities that he was not responsible for the shop in March when foreign tobacco products were found by a detection dog in a blue plastic bag.

A total of 126 packets of cigarettes and one packet of hand rolling tobacco were seized, some of which had warnings which were not in English and were not in plain packaging.

This comes after 47 tobacco products were seized by trading standards officers in January 2019.

Nasrou pleaded with the licensing sub-committee to give him another chance at a hearing on Wednesday.

Nasrou said he will now try to sell all of his stock and close the shop in Daubhill.

The business owner, who previously ran a takeaway in Horwich, said he would like to turn the premises in St Helens Road into a takeaway.

He said: “I’ve lost the business, I’ve lost everything. If I apply for a takeaway, I don’t know if they will give it to me.”

Nasrou, who took over St Helens Wines in 2017, told authorities that a man named Hosheyrar Hassan was responsible for the shop as of March 1, 2019.

He was trying to run the shop for a trial period of four weeks to see if he would wish to buy it, according to Nasrou.

The premises licence holder said he would attend the shop every few days but that he knew nothing about any concealment of illegal tobacco in the store.

The authorities also spoke to Abdulraham Alo, the shop assistant present at the time of the trading standards visit in March, in a Police and Criminal Evidence Act interview.

He said he was employed and worked for Hassan for three days only and left after the visit by trading standards.

Alo said he had heard of Nasrou but did not know who he was.

He claimed he did not know legislation regarding the sale of tobacco in the UK and said he did not smoke.

Alo told authorities that he had been told by Hassan to try to remove the plastic bag with tobacco in it if “controllers” came.

There are ongoing court proceedings relating to the alleged offences.