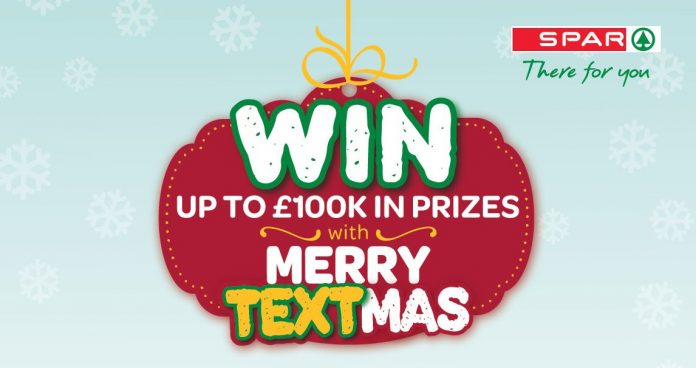 A.F. Blakemore & Son has announced the launch of a SPAR Christmas campaign giving away up to £100,000 worth of prizes.

‘Merry Textmas’ is a 25-day text-to-win competition that will be live in more than 300 Blakemore Retail and independent stores across SPAR’s Meridian & Welsh Guild from 8 December to 1 January.

The grand prize promotion consists of weekly prize draws offering customers the chance to win one of four big budget-boosting prizes: cash towards Christmas, fuel for a year, energy for a year or shopping at SPAR for a year.

Customers can win additional entries into the weekly grand prize draw by scanning a QR code on a poster at a SPAR store or downloading a ‘SPAR Merry Textmas’ app.

The app offers an in-store game that uses the customer camera to create an augmented reality Christmas tree, with virtual presents dotted around the store to place underneath.

“The Merry Textmas competition is one of our biggest in-store engagement campaigns this year. Following a successful trial at Easter, we’ve now rolled out a bigger and better campaign for our stores for Christmas,” Sarah Ellis, group marketing director at A.F. Blakemore, commented.

“It’s a chance for our stores and retailers to do something special for their shoppers. The prizes reflect the issues that are keeping our customers awake at night, so we’re looking to ensure they have the best Christmas.

“The competition is a great opportunity for retailers to attract new customers into their stores, promote their products and create a positive brand experience.”

The Merry Textmas campaign will be supported across social media and SPAR Radio.