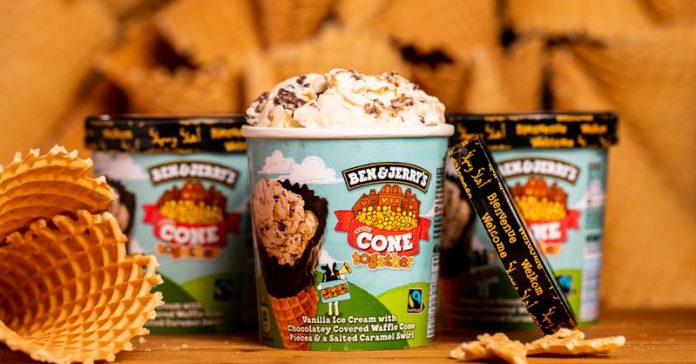 Ice cream company Ben & Jerry’s has announced the launch of a new flavour Cone Together.

The activist company said the new flavour is created to call for the rights of refugees to be advanced and protected.

The awareness-raising flavour was unveiled in December by co-founders Ben Cohen and Jerry Greenfield at the first-ever UN Global Refugee Forum in Geneva.

“Progress is possible when enough people come together and demand better. We believe in using our business and our connection with our fans to highlight important issues and help them take action,” Cohen said.

Ben & Jerry’s Cone Together – a Fairtrade vanilla ice cream, with chocolatey covered waffle cone pieces and a salted caramel swirl – is currently available in freezers across the UK with an RRP of £5.49.

A portion of the proceeds of the new tub will support six organisations including Refugee Action, Sea Watch, Red Acoge among others working to honour the rights of refugees.

At the Global Refugee Forum, Ben & Jerry’s pledged to mobilise more than 250,000 of its fans over the next three years through activism campaigns. Cone Together is the latest step in the company’s refugee advocacy work.