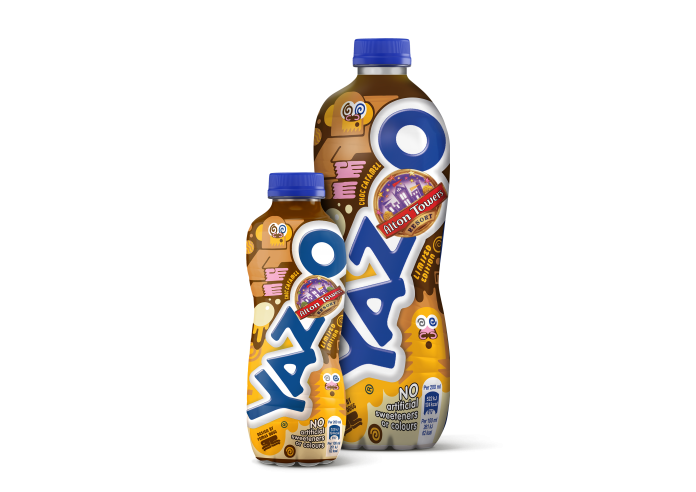 YAZOO, is relaunching one of its best-selling Limited-Edition flavours due to consumer demand – Choc Caramel.

The fans’ favourite variant will be available in standard and price-marked packs of 400ml in convenience and wholesale from early February and in grocery channels from late March, along with a one-litre format.

The latest Limited-Edition release follows the success of YAZOO’s Jaffalicious Choc Orange, which it will replace. The citrus flavour was a huge hit with consumers, delivering upwards of £1.23m incremental sales to the category.

As part of the Choc Caramel relaunch, the £74m brand launched a “find a designer” social media campaign, a nationwide, consumer-led competition to find the UK’s best up-and-coming artist. Artist and illustrator Tomas Dogg was chosen as the winner and was tasked with co-creating the limited-edition artwork, with input from YAZOO fans. This resulted in a perfectly random and eye-catching YAZOO pack design, which is sure to stand out in-store, making it an absolute must stock for retailers and perfectly aligned to the brand proposition of “shaking up the mundane”.

The bottles are 100 per cent rPET packaging and feature an easily peelable sleeve to make stripping and correct recycling even simpler. YAZOO’s chocolate products have also been certified by Rainforest Alliance cocoa.

“We’re into our fifth year of Limited-Edition launches, and we’re excited to bring back Choc Caramel by popular demand!” said brand manager Maren Fuhrich. “Our consumer-led competition has been a great way to reinject some fun, positivity, and engagement amongst our audience, especially after a challenging time for many.

“Choc Caramel was a huge hit with YAZOO fans when we first launched in 2019 and added £1.67m in sales value to the category between 2019-2020. As the market leader, we know that when we introduce innovation, we support the whole category, and we’re sure that Choc Caramel will be another hit with shoppers.”

The new flavour will be supported by a six-figure fully integrated marketing campaign which includes Video on Demand (VOD), print and digital advertising, social media support, competitions, and in-store activations.