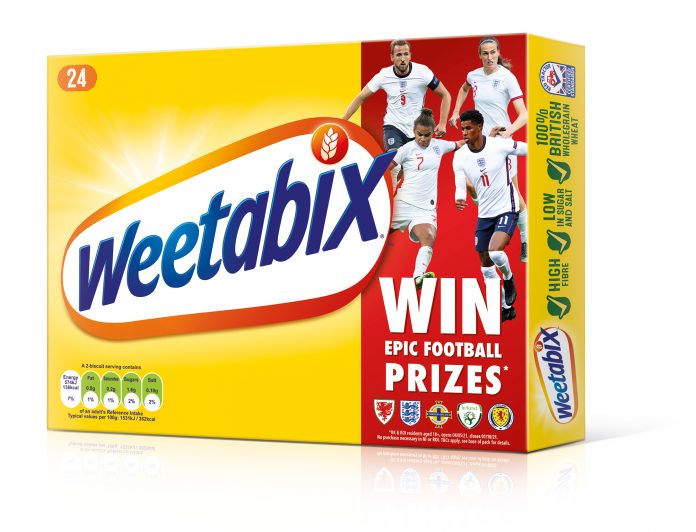 Weetabix has announced a new on-pack promotion, offering a host of football prizes and money-can’t-buy experiences with national team players. The promotion is part its long-term partnership with the home nations’ respective football associations and support of grassroots football.

Running from May until October across its best-selling portfolio of products – including Weetabix Original, Oatibix, Weetabix Protein, Crispy Minis and Weetabix On The Go – prizes also include the “ultimate PE training session” with FA coaches for one winner per nation and friends, signed shirts and tickets to international matches*.

The promotion is timed ahead of the big summer of football and the partnership aims to encourage kids to get active and help the nation to embrace healthy choices.

Weetabix grew by +£12million in 2020, bolstered by an increase in cereal consumption with more at-home breakfast occasions, as well as a spike in online shopping and bigger pack purchases. The new on-pack campaign is expected to capitalise on these gains, helping Weetabix to drive sales during the summer months, which are traditionally quieter for the category.

The promotion will benefit from major in-store displays in grocery stores, whilst Weetabix will work with field-sales specialists REL to create depot displays at wholesalers and provide POS to convenience retailers. Following growth in online purchases, Weetabix will also invest in digital grocery marketing to ensure high visibility at all touch points.

“We’ve heavily invested in the cereal category in the past 12 months, with £14million spent on marketing, and this promotion will further reinforce Weetabix as part of the fabric of British society,” said Gareth Turner, Head of Brand at Weetabix.

“Spontaneous awareness of the Weetabix brand is up 39 per cent year-on-year and this campaign will help us to further increase penetration for all parts of the Weetabix portfolio, building on a successful year for the brand and supporting our big growth ambitions.”

The new partnership will focus on Weetabix’s nutritional credentials, with all Weetabix-branded products classified as non-HFSS.