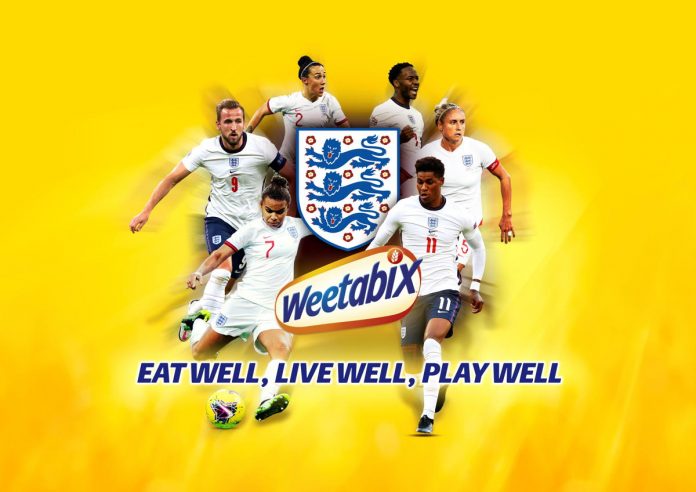 The football partnership will see the leading cereal brand becoming the Official Breakfast Category Partner of the England Women’s and Men’s Senior Teams and lead partner of Wildcats, the FA’s girl’s participation programme.

The Wildcats programme caters to girls aged 5-11, giving the opportunity to play football at the sessions run by over 1,600 providers across England. With the brand donning the role of headline partner, it will be renamed to ‘Weetabix Wildcats’.

Weetabix and the FA said they aim to double the number of Wildcats providers by the end of 2024.

The brand will also work closely with performance experts at the FA’s St. George’s Park football centre at Burton upon Trent, to implement learning about nutrition as part of the Wildcats programme.

“This partnership reinforces our belief that everyone can achieve their best with a proper, Weetabix start to the day, and we’re delighted that we can bring the Weetabix advantage to the next generation of talent through our work with the ‘Weetabix Wildcats’ and England Women’s and Men’s teams,” commented Gareth Turner, Head of Brand at Weetabix.

“We are already known as the nation’s favourite cereal and working with The FA will only cement this further.”

Turner said the brand is looking forward to collaborating with its customers in all trade channels during the two big summers for England’s Women’s and Men’s teams with the UEFA Euro in 2021 and UEFA Women’s Euro in 2022.

“Stand-out activations in store, warehouses and online will undoubtedly drive footfall to the cereal aisle and raise awareness of the entire category, tapping into heightened shopper interest,” he said.

The partnership will run from April 2021 with supporting activity featuring across all Weetabix-branded cereal products, including Oatibix.

Kikkoman to be back on TV for Chinese New Year