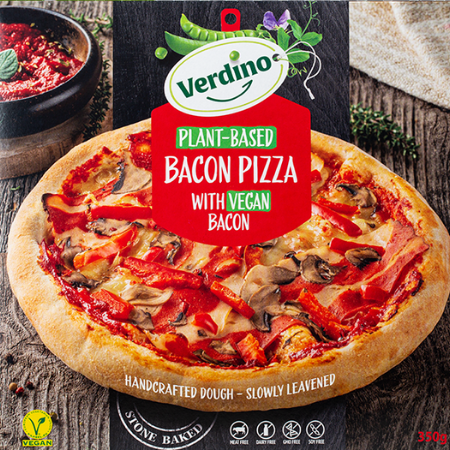 Verdino Foods, a brand delivering 100 per cent plant-based products using pea protein, is launching in the UK this August with the first in its range of frozen products.

Aimed at both plant-based consumers and those who may enjoy meat and dairy but are looking to cut their consumption, the Verdino range includes the first truly meaty plant-based pizza, with a variety of toppings, as well as plant-based burgers, sausages, veggie balls, mince and cevapcici.

Verdino’s frozen pizza is forecast to be the best seller in the range and has already garnered a loyal following in Spain, the Netherlands and Switzerland. Featuring dough kneaded with extra-virgin olive oil and baked in a stone kiln to form a fluffy crust, the pizza is available with five different plant-based toppings: Pepperoni; Deliciosa; Bacon; Mexicana; Plantuna; all with an RRP of £3.50.

As well as being free from meat and dairy, Verdino products are rich in fibre and proteins and are GMO-free, lactose-free, soy-free and vegan certified.

Verdino will initially launch its range via the brand’s own online store, bringing the products direct to consumers to create demand and loyalty before generating listings in grocery retailers.

This innovative sales model is being rolled out in Germany, as well as the UK.

“The UK plant-based food market is continuing to grow and UK consumers account for 40 per cent of the European meat substitute market so the time is absolutely right for Verdino to launch,” said Ian Bailey, Verdino Country Manager, UK & Ireland. “Our core proposition is to offer a sustainable alternative to meat products based on pea protein.

“We have an extensive range of successful products that have already been rolled out in a number of European countries, so the launch of our core frozen range this month will be closely followed by the introduction of our chilled range.”

Verdino will be launching 13 products in total in the UK, including: