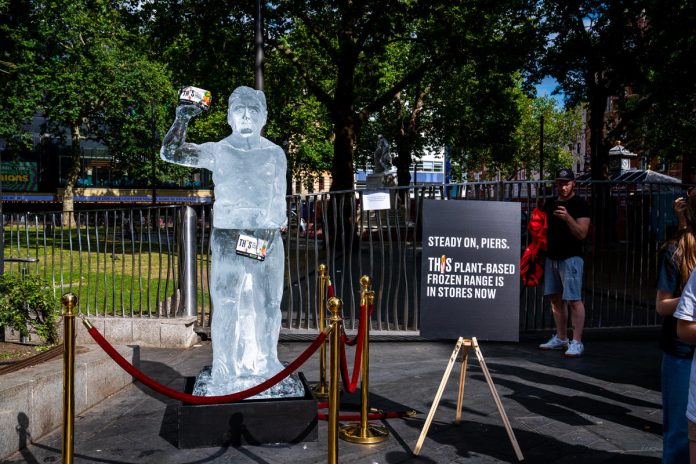 Plant-based meat alternative brand This has launched its new brand’s frozen range with a heavy dose of satire, erecting a giant ice sculpture of Piers Morgan, who is well known for his anti-veganism, in London’s Trafalgar Square.

The brand said it wanted to include ‘this special man’ in the launch celebrations! Morgan has continuously mocked plant-based food on his TV slots and Twitter, once even spitting his vegan sausage roll into a bin on live TV.

“We wanted to include this special man in the launch celebrations of our frozen food range. He is the man who thinks and talks about vegan food even more than we do. We know how excited he’ll be to try these,” Andy Shovel, co-founder of THIS, commented.

The 7 ft tall sculpture attracted large crowds in one of the highest footfall areas in London.

Meanwhile, the brand noted that the demand for plant-based food continues to sky-rocketm as its research shows that 46 per cent of Brits are wanting to eat more plant-based food.

THIS was founded in June 2019 by ex-meat fanatics Andy Shovel and Pete Sharman as a plant-based food brand for meat-lovers. It has just launched a range of hyper-realistic frozen products including Southern Fried Chicken Tenders, Chicken Nuggets and Sausages.

The brand is known for its humour and satire. It has previously announced its sponsorship of the Leicestershire village, Quorn, and tricked an entire Italian food show that it’s an artisan Italian meat business.