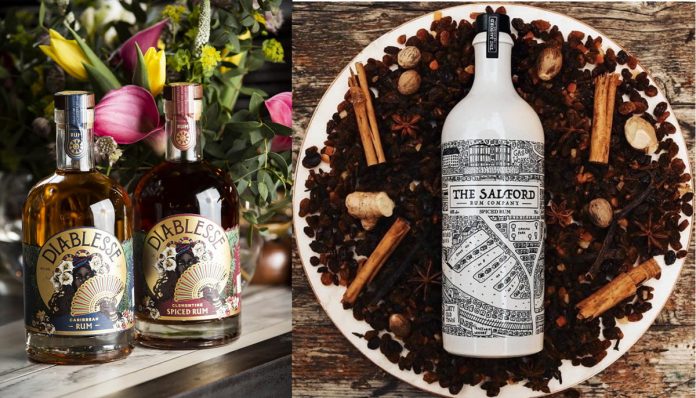 Ten Locks, a newly-launched premium drinks company, has announced the addition of two spiced rum brands to its portfolio: the Salford Rum Company and Diablesse Rum.

The distiller has already made a name in Greater Manchester with its range of small batch golden and dark spiced rums that are distilled, blended and bottled close to the old Salford Docks.

The Diablesse Caribbean Golden Rum is a blend of rums from three Caribbean distilleries, aged in American Oak ex-bourbon barrels resulting in flavours of banana, butterscotch and fruitcake, with tropical fruit and peppery oak notes.

Diablesse Clementine Spiced Rum, the only clementine spiced rum in the world, is a 100 per cent single origin Demerara rum from the Diamond Distillery in Guyana. Using traditional distillation methods, it is infused with only natural ingredients such as clementine, ginger, cinnamon, vanilla pod and clove, with a unique and highly moreish flavour profile.

Becky Davies, head of commercial at Ten Locks, said: “Our goal is to offer premium spirits of distinction with a clear point of difference to retailers, and that’s precisely what these brands are.

“Spiced rums are gaining huge traction and the appreciation they deserve. At the same time, the raft of NPD we’ve seen has started to swing towards high sugar and – at times – low quality products, much like pockets of the gin category. Our partnerships with The Salford Rum Company and Diablesse mean we step into these sectors proudly, with truly exceptional, extremely high quality and very authentic liquids with real profit potential and consumer appeal.”