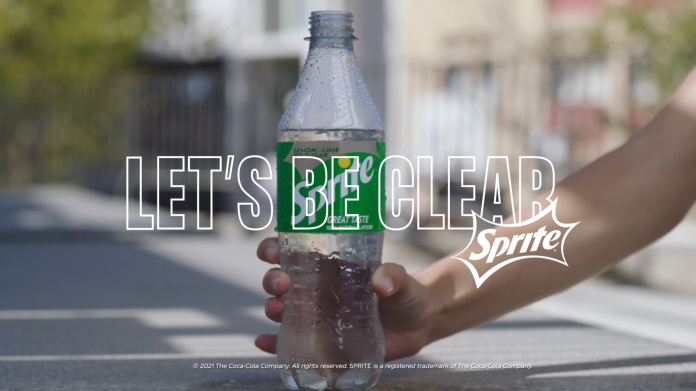 Sprite, manufactured and supplied by Coca-Cola Europacific Partners in GB, has announced the launch of “Let’s Be Clear”, a new, multi-million-pound global marketing campaign for the brand.

Airing from 1st July, “Let’s Be Clear” is grounded in consumer research and is designed to appeal to Gen Z – “a generation of digital enthusiasts who are passionate about the world around them” – encouraging them to take time to reset and refresh with a burst of refreshment from Sprite.

As well as launching on TV in more than 50 countries, the campaign will feature digital and snackable social media content, alongside iconic out-of-home and print executions.

Soft drinks consumption in the home has increased significantly over the last year, which has helped to drive £65.6m worth of additional sales of flavoured carbonates in GB.

Within the flavoured carbonates sector, lemon and lime flavoured Sprite – which is in 7.2 per cent value growth – will continue to play an important role in the coming weeks and months, providing a great-tasting soft drink for both at-home occasions and on-the-go refreshment, as consumers continue to get out and about more, said Louise Maugest, Marketing Director at Coca-Cola GB.

“We know that these principles matter to our target audience of young adults – arguably the most informed generation ever, to whom gaining clarity is vital. That’s why we’re confident that this campaign will tap into their mindset, increasing the appeal of the brand and helping drive sales for our customers this summer and beyond.

“The advert features the Sprite 500ml clear plastic bottle – which will be made from 100 per cent recycled plastic content in quarter four of this year. We moved Sprite from green plastic to clear plastic bottles in 2019, making them easier to recycle – a key factor in shoppers’ buying decisions, especially young adults.”