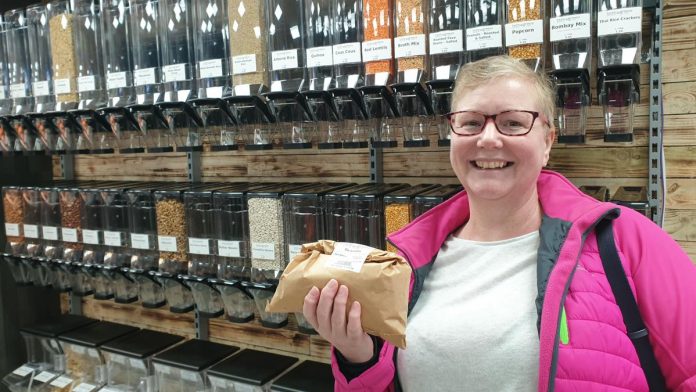 Scottish chain Eros Retail has opened their new store in Aberdeenshire with a community celebration.

The store boasts wall dispensers housing an impressive selection of nuts, grains, pulses, fruits and seeds, moving away from single use plastics.

A local butchery counter and a bakery ensure that the local supplier has a prominent place, something shoppers at the store are keen on.

Eros boss Harris Aslam, who acquired the store in August last year, said his team spent time getting to know the store and its customers before making any changes.

“We have found out what works really well here as well as what doesn’t. Shoppers are quite affluent and they like the local suppliers; the local butchery has always worked very well.”

The zero-waste range is another example of working with local suppliers.

Aslam said a local supplier who had recently opened a zero-waste store called Bare close by contacted him within hours of announcing plans to introduce a range. The supplier is now working in collaboration with Eros and the in-store zero-waste dispensers have been branded with the supplier’s name “Bare @ Greens”.

The store is also set for the installation of a growler station in partnership with BrewDog to enable shoppers to self-dispense beer into their own containers.

“A lot of people are still treating zero waste initiatives as a fad and trying to capitalise on it, but I believe this is the future and it is simply going to grow and grow,” Aslam said.

“When it comes to the zero-waste station, we have a better price point than the supermarkets because we don’t have the packaging costs to add in.”

The introduction of the ice cream and desserts range has also been well received by shoppers as has the Skwishee machine and vape store.

While the store itself has almost halved in size down to 3,500 sq. ft., the consolidation has enabled the Eros team to focus on the most important areas.

“We have made the store considerably smaller, but we have added more in by innovating and ensuring the needs of our customers are addressed. I think it is going to be one of those stores that will need constant innovation and we will look forward to that challenge,” Aslam added.

He plans to eventually roll out the formula across to his entire portfolio of stores, which is now being looked after by Nisa’s key accounts team. Integration of the Co-op range into store is also on the agenda.