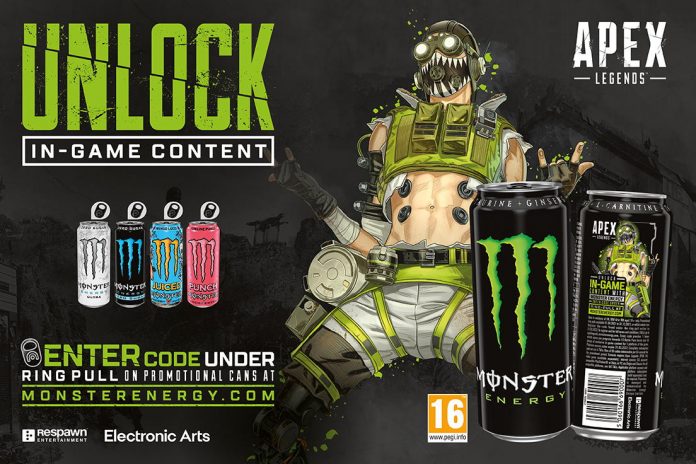 Monster Energy has announced a brand-new partnership with Apex Legends, to help retailers tap into energy drinkers’ thirst for gaming.

An Apex Legends on-pack promotion is live now on must-stock variants from Monster’s core, Monster Juiced and Monster Ultra ranges, running until the end of the year.

Unique codes can be found under the ring-pulls of cans (and cans within 4 x multi-packs) of Monster Original, Monster Absolutely Zero, Monster Ultra White, Monster Juiced Mango Loco, Monster Juiced Pipeline Punch and refreshed Monster Assault, and consumers have until the 31 March 2022 to enter their codes online, which will then be uploaded in their EA account – giving them points towards exclusive Battle Pass prizes and in-game content.

Every can purchased earns points towards exclusive prizes, the more points earned, the more prizes that can be won.

Promotional pack designs feature two of the game’s biggest legends to drive standout on-shelf. In addition, high-impact POS materials are available from My.CCEP.com from the middle of October to help retailers create even more theatre in-store.

Monster will also leverage its international social media following and run several high profile media partnerships to maximise awareness of the Apex Legends partnership, throughout the promotional period and beyond.

Since its launch in 2019, Apex Legends has taken the gaming world by storm with more than 70m global players.

Coca-Cola Europacific Partners (CCEP), which manufactures and supplies the drink in Britain, said the latest promotion will give Monster a boost at a time when the brand is already on a record-breaking trajectory. Adding nearly £98m of value in the past year alone, Monster is worth more than £374m and has secured its highest-ever segment share.

“Gaming continues to be a huge and fast-growing part of the global entertainment industry – in which Monster has been a major player for nearly two decades. We’re always looking to reward our loyal Monster fans with unmissable experiences and believe our partnership with Apex Legends will do just that – as well as helping to recruit new shoppers from the wider Apex fanbase,” Martin Attock, vice president of commercial development at CCEP GB, said.

“We ran a hugely successful gaming promotion this time last year, and we’re confident of the same again. That’s why we’re encouraging retailers to get behind us and take full advantage as we bring together these two iconic brands.”

10,000 more Dementia Friends thanks to One Stop colleagues