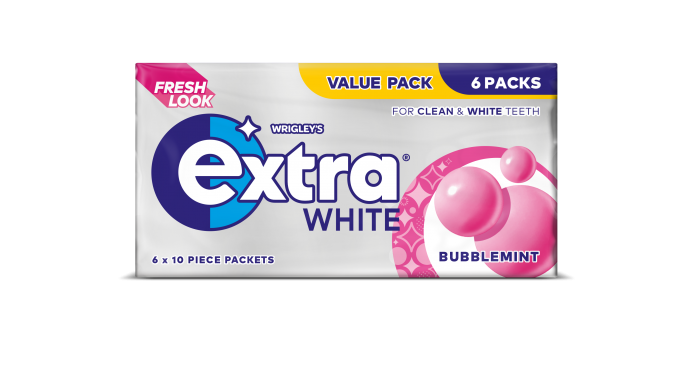 Mars Wrigley is launching its first global campaign for EXTRA, “Find Your Fresh Look”, which goes live first in the UK this week. Designed to keep gum top of mind and grow the brand’s penetration with under-25’s, the campaign supports a re-brand for all EXTRA chewing gum and includes UK partnerships with ISAWITFIRST and BadHero.

Mars Wrigley’s campaign will support the growth of EXTRA chewing gum by targeting under 25s—a first for the brand. With nearly 50 per cent of gum consumption coming from Gen Z, this campaign aims to increase gum penetration amongst this demographic, increasing segment sales.

The partnerships with ISAWITFIRST and BadHero centre around consumers finding their own “Fresh New Look” to start the year. There will be a significant multi-channel campaign to support this campaign featuring influencers such as Made in Chelsea’s Sam Thompson, and Love Island’s Shaughna Philips and Olivia Attwood, alongside a social dating show, The Extra Fit, showing on YouTube. Extra is also running a UK wide competition in store to “Win a New Wardrobe” with ISAWITFIRST, alongside the opportunity to win a variety of other prizes along the way.

Gum is the most profitable grocery category with more than 8.4 million consumption occasions each year , so growing the consumer base will be key. This campaign marks the beginning of a series of exciting campaigns for Mars Wrigley, with the aim of reaching the next generation of gum consumers and get half of the nation chewing gum by 2025.

With this in mind, retailers are being supported to improve gum availability in stores with Mars Wrigley’s partnership branded disruptive point of sales and free-standing display units. 46 per cent of consumers reported they will not buy gum if the product they want is not available, and 80 per cent of sales taking place within the transaction zone , so impactful point of sales play an important role in visibility and awareness.

“This is the first global campaign for Extra,” said Sasha Storey, Senior Brand Manager, EXTRA. “We are excited to be the first market to go live and showcase Extra’s brand new look and feel. This is an exciting new area for EXTRA to build brand awareness and penetration with the next generation of gum consumers, with nearly 50 per cent of gum consumption coming from Gen Z, we know there is scope to grown gum sales in the UK.”