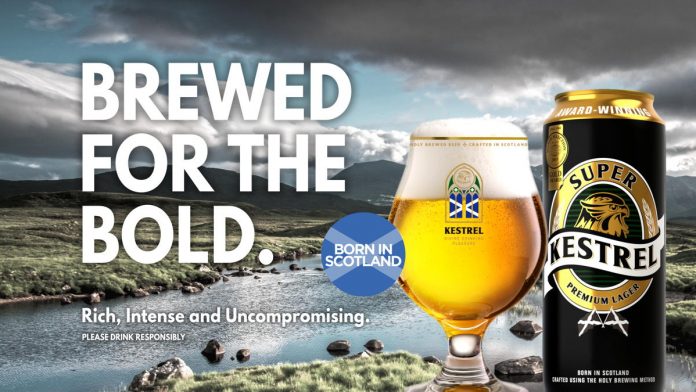 Sottish beer Kestrel lager has launched a new TV commercial that targets millennial drinkers with its ‘Brewed for the Bold’ positioning.

The ad seeks to continue the rejuvenation of the heritage beer brand and support sales growth in both the UK and export markets around the world.

The new commercial airs initially across digital platforms and channels including Samsung TV Plus, Amazon and Insight TV’s international network from 21 March to coincide with the launch of The Flying Kestrel, a new global TV documentary series which tells the story of the beer brand’s renovation of a classic 1935 Riley Kestrel car into a multiple land speed record breaker.

The campaign will extend into print and digital outdoor supported by dedicated social media, influencer, PR and e-commerce programmes.

“We vowed we would bring this brand back to glory and with our TV documentary going out internationally to an audience of up to 300 million and now with the new commercial, we are truly driving the visibility and brand equity across multiple global markets,” said Nigel McNally, founder and chief executive of Brookfield Drinks which owns Kestrel.

The company said the brand has achieved sales growth of over 40 per cent in the UK and export sales expansion of 103 per cent across key developing markets including the US over the last six months, as per ex-factory data.