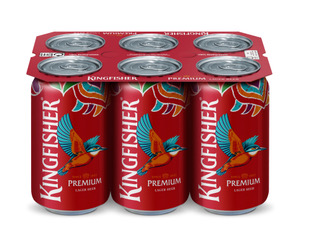 KBE Drinks has announced the launch of a new 6 x 330ml can format for Indian beer Kingfisher.

The distributor said the production has started and deliveries will be in the next two weeks, with RRP of £6.

The launch coincides with the promotion of firm’s sales director Shaun Goode as chief operating officer to lead the business.

Goode has played a key role in expanding Kingfisher, the company’s flagship brand, into key international markets such as the UAE and Canada. Within the UK, he has helped broaden Kingfisher’s appeal beyond the curry occasion.

“Whilst the British curry channel will always be the beating heart of the brand, it is important for us to not limit its appeal to just one consumption occasion,” he commented.

Whilst KBE has been severely hit by the ongoing COVID-19 crisis, losing around 95 per cent of its profit base overnight when first lockdown announced in March, Kingfisher has performed well in off-trade with sales up 81 per cent year on year.

“Being a smaller business has offered some benefits as we have been able to pivot more quickly launching new SKUs such as a new 330ml Kingfisher can format,” the firm said in a statement.

Joining in October 2016, Goode has also been instrumental in growing the portfolio of KBE, then a single-brand business selling Kingfisher Beer in the UK and Europe. The firm now operates as the exclusive distributor for 14 global beer and cider brands, including such favourites as Sagres from Portugal, Dos Equis from Mexico and England’s own legendary ale, Theakston Old Peculier.

“We have some exciting new brand projects and commercial initiatives ongoing and expect to be able to share positive news of our plans in the coming months. As consumers develop evermore curious and sophisticated tastes, we’ll continue to search out new opportunities that will offer something a little different,” the firm said.