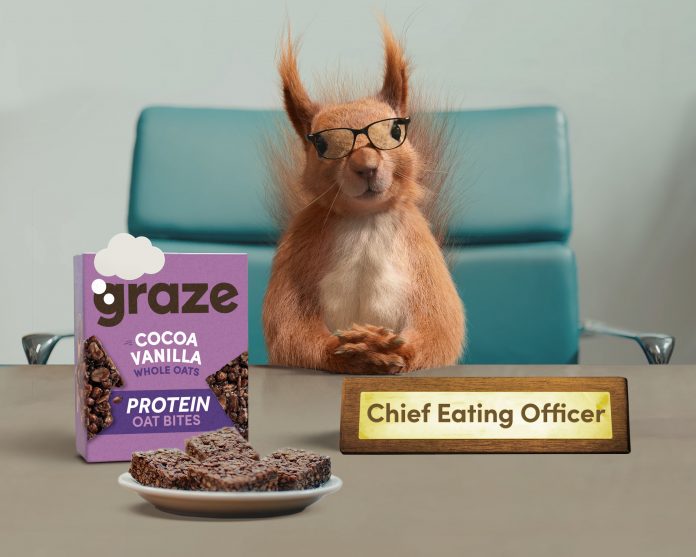 Healthy snacking brand graze has launched its first TV ad for as part of a £5m media value plan for 2021 – the brand’s biggest investment to date. graze will air on TV screens across the nation from 8th April, with the ad set to reach around 40 million shoppers, equating to 80 percent of UK adults, as it looks to recruit new customers.

The advert will run first between April and July and give shoppers a fun behind-the-scenes glimpse into the breakthrough work going on at the graze HQ, led by the newly appointed Chief Eating Officer (CEO) – a squirrel. The ad marks the debut of the brand’s furry “CEO”.

The other star of the ad is the brand’s Cocoa Vanilla Protein Oat Bites. Viewers will see the cereal bar range get the seal of approval from the CEO as it contains 45 per cent less sugar than the average cereal bar, while maintaining taste.

Pia Villa, Chief Brand Officer at graze, commented: “With health front of mind and more people looking for healthier snacking alternatives, now is the right time for us to be ramping up the awareness of our graze retail range.”

Shoppers see sugar as the number one barrier in the cereal bar category[1], and as part of its health promise, graze has removed a massive 160 tonnes of sugar in 2019 from its cereal bar range.

graze has also recently received its B Corp certification, which sees it join a strong line up of businesses committed to being a force for good in the world when it comes to people, planet and profits.

The new graze TV ad can be viewed here.