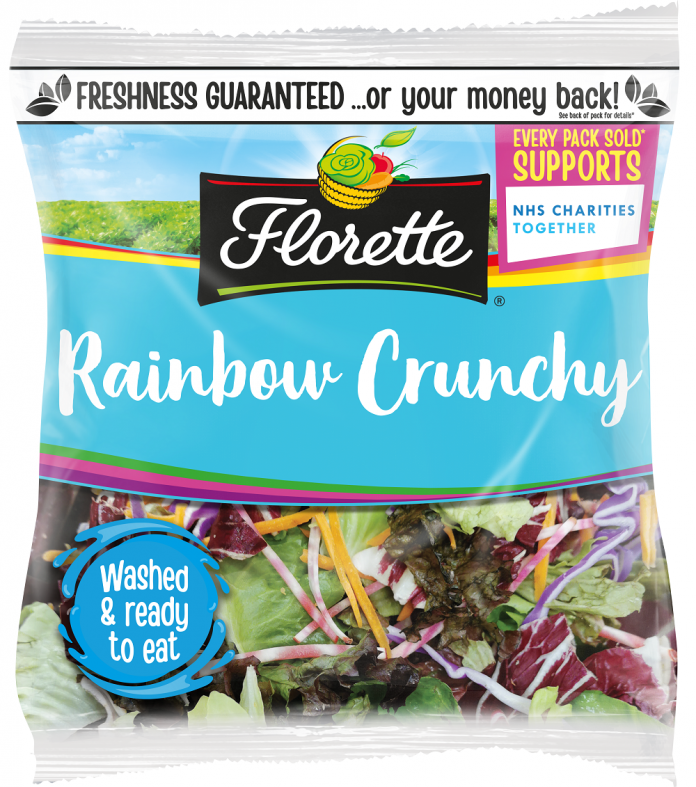 Florette, the No.1 brand in the UK’s £598 million leafy prepared salads market, is launching a new flavourful bagged salad, bursting with colour and crunch.

The category-boosting NPD, “Rainbow Crunchy”, will bring standout to the fixture with a colourful crunchy assortment of mild leaves, including escarole and radicchio and vibrant crunchy vegetables such as carrot and candy striped beetroot.

The new product will launch with a charitable on-pack partnership, with Florette pledging a 2p donation to NHS Charities Together for every pack sold.

Playing a more important role than ever before in the last 12 months, NHS Charities Together represents, supports and champions the 240 NHS Charities across the UK that give over £1 million every day to NHS so that people can stay well for longer and get better faster.

The partnership follows Florette’s previous collaboration with Diabetes UK that raised over £61,000 to support the charity’s invaluable work.

“Even the most enthusiastic salad eaters get stuck in a rut on occasion and make do with basic salads, which, whilst nice enough, aren’t exciting,” said Hazel Clark, Head of Marketing at Florette UK. “They need help and inspiration to create food that they will love to eat.

“Our in-house chefs have developed recipes to perfectly pair with the salad, which will feature at the heart of our new marketing campaign.”

The NPD will be supported by a £1 million marketing investment, including ATL, shopper marketing, in-store activation and a digital campaign enhancing visibility, alongside social media and on-pack recipes to inspire shoppers.

“We put flavour, taste and insight at the heart of every innovation and this product is no exception, bringing high purchase intent among ABC1 shoppers, all backed by our freshness guarantee,” added Hazel.

“We’re also really proud to be able to support NHS Charities Together. Even without the extra challenges of COVID-19, the charity works tirelessly to make a big difference to millions of families when they need it most. As a nation, we’ve relied on the NHS more than ever before in the last 12 months, this partnership goes just a small way towards saying thank you.”

Research shows one in five households purchase leafy salads annually with over 90 per cent of shoppers looking to lead healthier lifestyles.

“As the No.1 brand in the category with 7 million households already buying Florette each year, we are perfectly positioned to meet the growing demand for fresh, tasty, nutritious products which satisify consumer needs,” Hazel concluded.

Rainbow Crunchy will launch on 12th April (at Sainsburys), before rolling out market-wide.