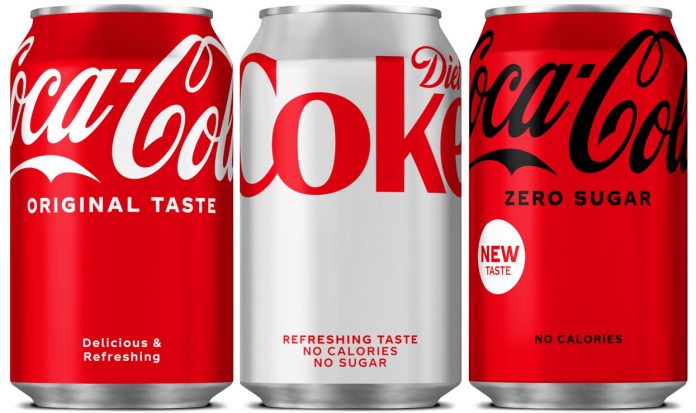 An evolution of the ‘One Brand’ Strategy launched worldwide in 2016, the global packaging update brings Coca-Cola, Coca-Cola Zero Sugar and Diet Coke together in a simplified new design.

The design removes added elements such as the red disc, and raises the Coca-Cola logo to the top of the label.

The brand’s original and universally-recognised colour red is paired with white Spencerian script for Coca-Cola Original Taste and with black script for Zero Sugar, leveraging the trademark and typography in a different way to indicate the Zero Sugar variety coupled with other details such as black bottle caps.

Diet Coke will also sit within the Coca-Cola trademark design family, with its signature silver background and red logo. These will be consistent across all global markets that offer these lighter taste choices.

The updated design will be led by Coca-Cola Zero Sugar, which has also debuted an evolved recipe that brings it close to the taste of Coca-Cola Original Taste.

The new recipe will be supported by a new marketing campaign, ‘Best Coke Ever?’, which will span across TV and digital films, out-of-home assets and social media.

The new recipe, design and campaign for Coca-Cola Zero Sugar has already launched in Europe and Latin America. The rest of the trademark design evolution will follow, rolling out globally throughout 2021, with flavours to be fully converted over in 2022.