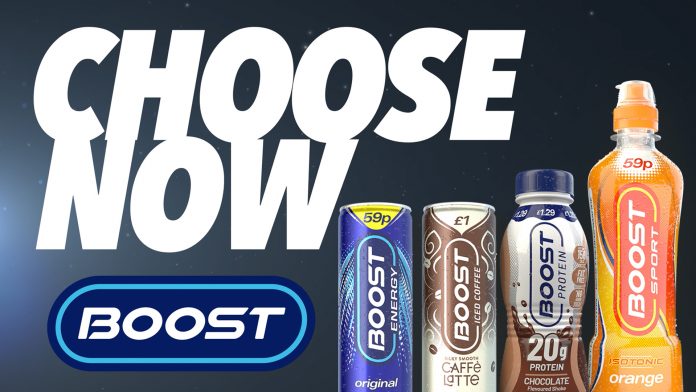 Boost energy drinks has announced a brand new £1.2 million autumn campaign, titled “Choose Now”, that will air from 18 September, and which will include three new TV commercials, extensive digital, and an OOH spend with ads on 175 buses. It celebrates the busy, innovative lifestyles of today’s young consumers and the creative “side hustles” they use to get ahead, enjoy themselves and deal with life.

“The consumer insight behind the campaign is that we’ve learnt our audience is busy,” said Adrian Hipkiss, Boost’s Marketing Director. “Life is hectic, they’re switched on 24-7, multi-tasking, side-hustling and hobby-loving. We talk a lot about this audience – called Generation Hustle. It’s a mass audience, ultimately people living for the everyday juggle

At a morning briefing today, 10 September, Hipkiss outlined the company’s strategy as they step up their presence in the RTD iced coffee sector as well as in the energy drinks cabinet, stressing that the two kinds of product will be treated as separate and discrete markets.

“You will notice that our product has a superior caffeine content, and it has less fat than the market leader,” Hipkiss added. “It’s a very stable product, with a really smooth taste. It also offers retailers 18 months’ worth of shelf life … We really see a big future with chilled coffee.”

Other elements to note – partly consequences of the lockdown and changes in consumer behaviour – include health-slanted purchases (with 66 per cent of 18-24-year-olds regarding chilled coffee as a ‘better alternative’ to sugary drinks); the rise in preference for flavour in energy drinks, with 34 of the of the volume growth being attributed to taste development; and also an increased preference for less sugar in energy drinks, where sugar-free is growing at 3.6 per cent annualised – well over double the rate of full-sugar at 1.4 per cent. Boost’s sports business is now in 44 per cent YoY growth.

The new “Choose Now” campaign is also is set to launch an initiative aimed at providing “generation hustle” funds to give their side businesses and hobbies a boost. The Choose Now Academy is launching in September/October and will give consumers the opportunity to win their share of £15,000. Living on Boost’s social media channels (not on skus), the initiative will involve hopefuls pitching their ideas to Boost’s hustle panel made up of the brand’s campaign ambassadors. There will be one overall winner who will receive £10k worth of funding, and five runners-up who will receive £1,000.

“Retailers must ensure that they are giving their consumers as wide a choice as possible from big brands, alongside challengers, to benefit from increased sales,” Hipkiss summed up, revealing lessons learned under lockdown.

“The sports energy category was under a lot of pressure in the first stages of the pandemic, but we have seen a massive recovery. For example, in the past 12 weeks, due to changing shopper habits, four-packs of energy drinks have grown by 44.7 per cent, with Boost sales having grown by 112.6 per cent.”

Right now, the energy drinks category is bursting with get up and go.