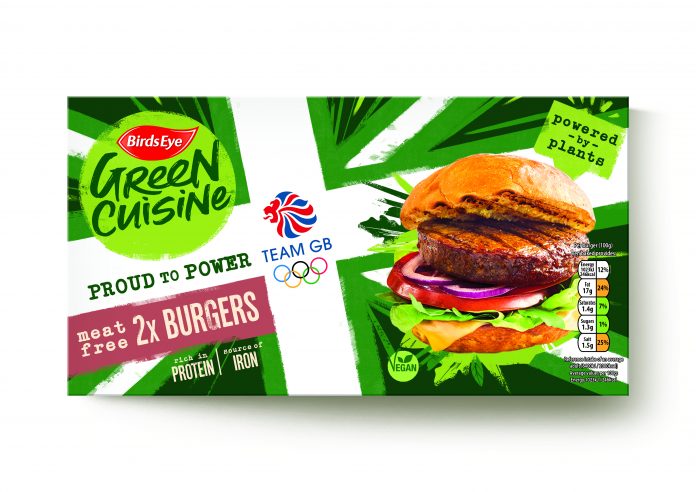 Birds Eye is has become an official supporter of Team GB ahead of the Tokyo 2020 Olympic Games, which are set to kick-off on Friday 23rd July.

With under four months until the start of Tokyo 2020, the collaboration will see Birds Eye launch a new TVC tag as part of a detailed marketing campaign, which will incorporate in-store activations, on-pack promotions and social media activity with Team GB athletes.

“We are so proud to become the official plant-based partner to power Team GB,” said Sarah Koppens, Birds Eye UK Marketing Director. “As the fastest-growing frozen meat-free brand, we have a relentless ambition to demonstrate the delicious power of plants, dispelling any lingering misconceptions around the meat-free category. We conducted a quick-fire Facebook poll with a group of past and present Team GB athletes and over two-thirds said they’ve actively reduced their meat consumption over the past three years. We look forward to bringing some of their stories to life throughout our campaign.”

British Olympic Association Commercial Director, Tim Ellerton, said: “This is an exciting partnership in a really interesting area, not just in our athlete community but on a wider national scale as meat-free and plant-based diets become increasingly popular. The team at Birds Eye have some very exciting activation plans in the coming months and we’re proud to support them in bringing those plans to life with the help of a variety of Team GB athletes.”

The Birds Eye Green Cuisine range is now worth £17.5m in the UK. The portfolio consists of frozen meat-free versions of Birds Eye’s family favourites, such as Chicken-Free Dippers, as well as a range of visible veg products such as Veggie Fingers and Veggie Burgers.

Pea protein is a rising star in the plant-based sector, with the market’s worth expected to rise to a staggering £144m by 2025. Offering multiple benefits – such as the inclusion of iron and being made up of almost 80 per cent protein – demonstrates why it’s so sought-after by consumers.

Birds Eye has a long heritage in pea production and a market-leading position in frozen food. Consumers trust the brand to deliver quality products, and by recreating mealtime classics using pea protein and other plant-based ingredients, the brand has successfully made the meat-free frozen fixture more accessible and inviting to families.