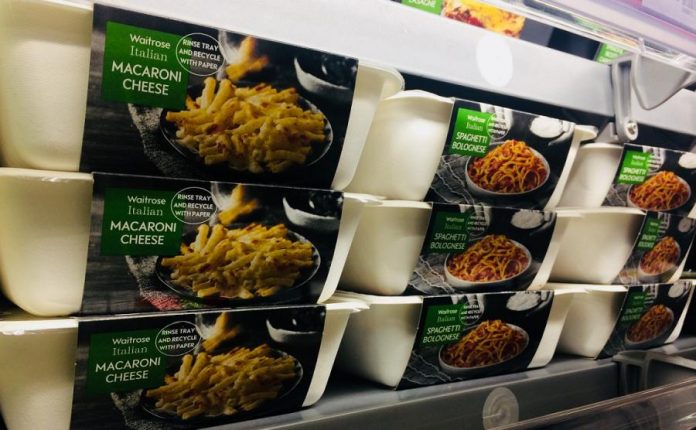 Waitrose has announced the expansion of its trial for replacing black plastic from ready meal packaging.

From this week, the retailer will trial three of its Italian ready meals in a widely recyclable tray for two months.

The retailer builds on its successful June trial of the fibre based alternative to black plastic, which is tough to recycle, ready meal tray.

Now the trial is taken to a majority of its shops and Tuna Pasta Bake meal is added along with Macaroni Cheese and Spaghetti Bolognese.

“Customer feedback from the June trial has been really positive with shoppers asking where the fibre based trays went after the trial ended,” said Karen Graley, Packaging Manager at Waitrose.

The supermarket’s investment in a material to replace the black plastic tray, which the ready meals are usually in, has seen it create a fibre based tray which feels like cardboard.

The cream coloured container is Forest Stewardship Council certified and is labelled as widely recycled. It says on the packaging to rinse the tray and put it in with paper recycling.

The trays can be heated in the oven and microwave.

“If our trial is a success we’ll be looking to roll it out further and this could potentially save millions of plastic trays going to landfill every year,” added Graley.

The retailer termed the move as the next step in its pledge to stop using black plastic packaging by the end of 2019.

Last month, it has announced that it will be removing loose fruit and vegetable plastic bags by spring 2019 and 5p single use plastic carrier bags by March next year in all shops.

It has pledged to make all of its own label packaging widely recycled, reusable or home compostable by 2025.