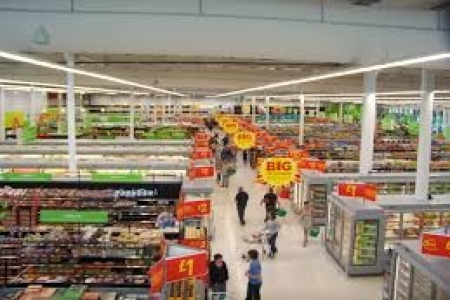 SALES at all the Big Four supermarkets are down for the first time since records began as consumers turn to convenience stores, new figures reveal.
Tesco, Sainsbury's, Asda and Morrisons all experienced a decline in sales, with the entire grocery market down 0.2% in the 12 weeks to 9 November according to analyst Kantar Worldpanel, the first fall since records started in 1994.
The hardest hit of the Big Four is Tesco, which saw sales drop 3.7% in the 12 weeks to 9 November compared with a year ago.
Sales at Morrisons and Sainsbury's were down 3.3% and 2.5%, while Asda dropped 0.2%.
The Big Four's share prices have dipped by tens of per cent this year, the latest drop on 17 November being another 1-2 % after analysts at investment bank Goldman Sachs published a report.
Goldman Sachs said the big supermarkets have expanded too far in recent years, and now need to close one in five stores.
However, convenience stores grew annually by 4.2% from 2009 to 2013 according to Mintel, while the big out of town stores saw an annual rate of growth of 1.6% during the same period.
“Consumers have been voting with their feet and wallets. As symbol retailers get more professional and offer better promotions there is no need to travel and queue to supermarkets. Symbols that have got their act together like Best-one are growing at the expense of the supermarkets and the symbols groups that are currently in a state of flux,” James Hall, Symbol Director, Bestway Wholesale, told Asian Trader.
“However in order to maintain the growth, stores have to embrace the categories that the modern shopper is looking for and meet or exceed their expectations.
“That means continuing to improve destination categories like chilled and fresh food, food to go, chilled beers and premium wines, etc, in addition to getting core impulse and grocery spot on. If retailers get this right, then consumers will willingly continue to use their local store and shun the supermarkets.”