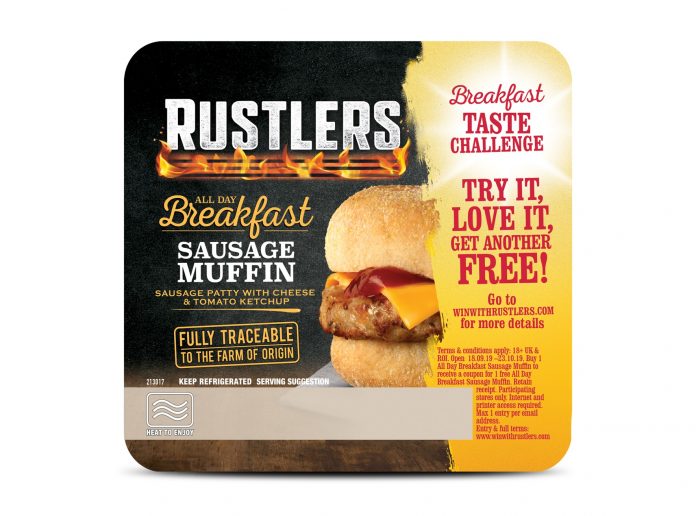 The Rustlers Breakfast Taste Challenge ‘Up For It’ will centre around an on-pack promotion, offering shoppers a second free All Day Breakfast Sausage Muffin when they buy, try and enjoy the product.

The offer will also be promoted on packs of Rustlers Quarter Pounder.

The promotion, which aims to drive trial among new audiences and increase product penetration, will run from 23 September for one month estimated to reach 2.8 million shoppers.

“Widely viewed as the most important meal of the day, breakfast, whether at home or on the go, is eaten by 95 percent of the UK. This figure has risen 6.9 percent in the last four years and now accounts for 16 percent of occasions, highlighting the opportunity for Rustlers to meet the growth in demand with hot, quick and tasty breakfast options,” said Monisha Singh, shopper marketing manager at Kepak.

The campaign will be supported by an in-store activation and a national sampling campaign in partnership with student sampling company, Dig In.

Launched last year, the All Day Breakfast Sausage Muffin has become one of the most popular SKUs in the Rustlers range, worth over £10.2 million and purchased by 1.2 million households, the company said.