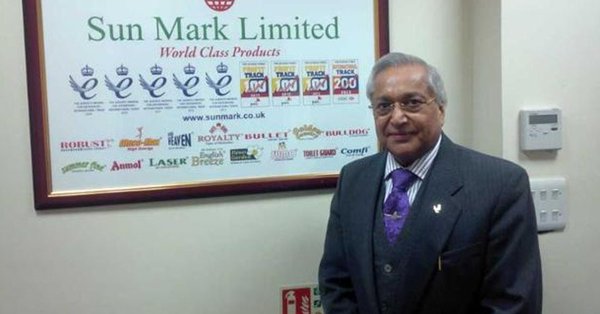 Sun Mark founder Rami Ranger has been made a Lord in the resignation honours list.
Ranger, 72, is a donor to the Conservative party and co-chair of the Conservative Friends of India. Sun Mark is the only firm to have been awarded five consecutive Queens Awards for Enterprise.
Previously awarded an MBE and a CBE for services to business and community, Ranger is chairman of the British Sikh Association.
He was among the donors for the Mahatma Gandhi statue erected in Parliament Square in 2015 by former Prime Minister David Cameron.
Ranger was born in July 1947, just one month before the partition of India, in Gujranwala, now Pakistan.
His father Sardar Nanak Singh opposed partition and was killed in the violence, meaning Ranger lived with his widowed mother and seven siblings in a refugee camp in Patiala, India.
After graduating from Government College, Chandigarh, Ranger arrived in the UK in 1971 to study law, but lack of money forced him to give up his studies and take odd jobs.
With £2 in capital, he started logistics and freight company Sea, Air and Land Forwarding Ltd in a shed in Hayes in 1987.
In 1995, he launched export firm Sun Mark Ltd, exporting British FMCG products to 120 countries.
Ranger published his memoirs, titled From Nothing to Everything. He says: “My story shows that one does not need a rich father, an elite education or the old schoolboy network to help one in life. What one needs is self-respect, ethics, commitment, vision and empathy”.
He joins several Indian-origin members in the House of Lords, including Swraj Paul, Bhikhu Parekh, Karan Bilimoria, Meghnad Desai, Navnit Dholakia and Jitesh Gadhia.