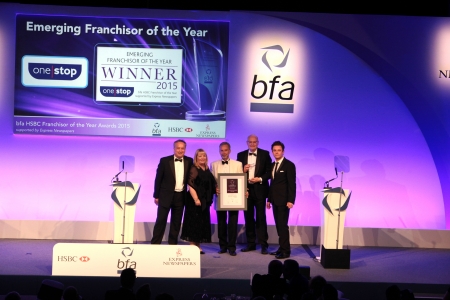 ONE STOP FRANCHISE has been named Emerging Franchisor of the Year at the prestigious 2015 bfa HSBC Franchisor of the Year Awards.
At a black-tie dinner held at the ICC in Birmingham, One Stop's Andrew King and Mark Everitt were presented with the top accolade by award hosts Andy Brattesani, head of franchising at HSBC; Cathryn Hayes, head of business support at the bfa; and Sean Hammond, classified advertising manager for Express Newspapers.
Judges looked for a franchisor of five years or less who had a strong network of support to give their network of franchisees as they expanded. They were impressed by One Stop’s swift rise, their education on the franchise model and the focus on franchisees’ success. The British Franchise association (bfa) annually recognises the very best of the UK franchisors. The five category award winners were selected on their ability to showcase their achievements within the diverse Franchise sector.
Andrew King, One Stop’s franchise director, stated:
“It’s an honour to receive this award so soon into our franchising journey. Pioneering a completely new offering in the convenience store sector was not an easy undertaking, but we’ve now been acknowledged for our understanding of franchising as well as our retail skills. It’s a credit to our team, who have researched and developed our franchise model so successfully.”
See www.thebfa.org/franchise-awards for more details.