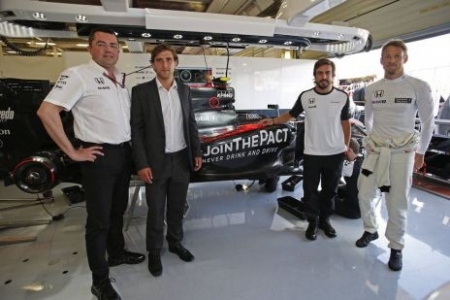 REFLECTING their shared commitment to combatting drink driving, Johnnie Walker, the Department for Transport’s ‘THINK!’ road safety campaign and McLaren Honda have launched a unique anti drink driving campaign at the 2015 Formula One British Grand Prix.
On the side of the McLaren Honda car will be the signatures of Jenson Button, Fernando Alonso, McLaren Chairman and Chief Executive Officer Ron Dennis and Racing Director Eric Boullier featuring alongside the #JOINTHEPACT and ‘THINK!’ logos that remind people not to drink and drive.
The initiative is part of Johnnie Walker’s global Join the Pact campaign and comes as the brand celebrates their tenth year supporting McLaren. By 2018, the campaign aims to collect five million commitments from people to never drink and drive. Johnnie Walker has already collected almost 2.5 million signatures from people around the world, including 25,000 at the 2014 Ryder Cup alone.
More than 300,000 members of the public are expected to be watching the race over the Silverstone weekend and approximately 80 million viewers around the world will tune in to watch the action at the 2015 Formula One British Grand Prix on TV.
Road Safety Minister Andrew Jones commented: “Drivers know that drink-driving is a dangerous offence which can ruin lives.  However there are still some who put themselves and other road users at risk by getting behind the wheel when they know they shouldn’t.   That is why we are calling on drivers to make sure they don’t risk their safety and the safety of others by drink-driving this summer.”
Jenson Button, McLaren Honda Formula One Driver and 2009 F1 World Champion said: “Driving safely at any speed means every driver has to be fully in control at all times, something you can’t do if you drink. Racing drivers like to be fast but we also want to be safe.
“So to be able to support the anti-drink drive message on my McLaren Honda in front of my home fans and to get their support behind me and the campaign will be extra special.”
Andrew Cowan, Country Director, Diageo GB added: “We want to give a strong message to the public to never drink and drive, and can’t think of a more powerful way to do so than to partner with the government and Formula 1 stars to deliver this message with one voice.”
Over the Silverstone weekend, Johnnie Walker will also be giving safe ride homes across the UK using UBER for first time users with the code JOINTHEPACT.
To sign up to Join The Pact, use #JOINTHEPACT on social media and make your commitment to never drink and drive.