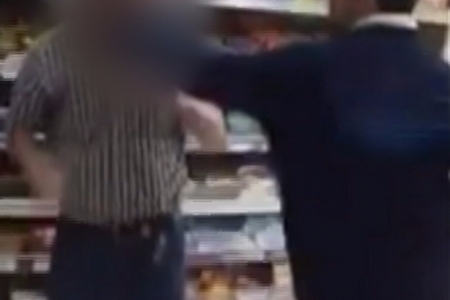 POLICE in the London borough of Newham made an arrest after a video on social media showed a man in a Costcutter store repeatedly slapping a suspected shoplifter, telling the individual they would “slap the f*** out your face.”
In a statement, police said they had become aware of a video showing a possible assault and made an arrest two days later following enquiries.
Although a man in his early 20s was taken to a police station in east London, no allegation of assault had been made to police.
In the video a man wearing an Adidas jacket in a Costcutter store asked another man to open his bag.
After the customer unzipped the bag, the other man repeatedly slapped him in the face and insulted him.
“If you ever steal from this shop again, I'm going to slap the f*** out of your face,” he reportedly shouted.
After the would-be shoplifter tried to take his bag back, the man said: “You're not going to have your bag or nothing. This is not a normal shop. I will f*** you up personally. You f***ing piece of s***.
“I pay tax. If you ever steal again, I'm going to f*** you up.” He then told the man to leave the shop.
A Costcutter statement said the group is shocked by the events in the video and that the behaviour was totally unacceptable. The man in the video does not work for the company, the statement claimed.
“While it is not possible for the shopkeeper to take any direct action with regards the person shown in the video, we immediately contacted the police to ask them to investigate this incident further,” Costcutter said after the video went viral online.
In another statement released after the arrest, Costcutter said it was pleased someone had been taken into custody regarding the assault video.
Newham police said enquiries were continuing and are still appealing for anyone who was in the store at the time of the assault to contact Newham CID by dialing 101.