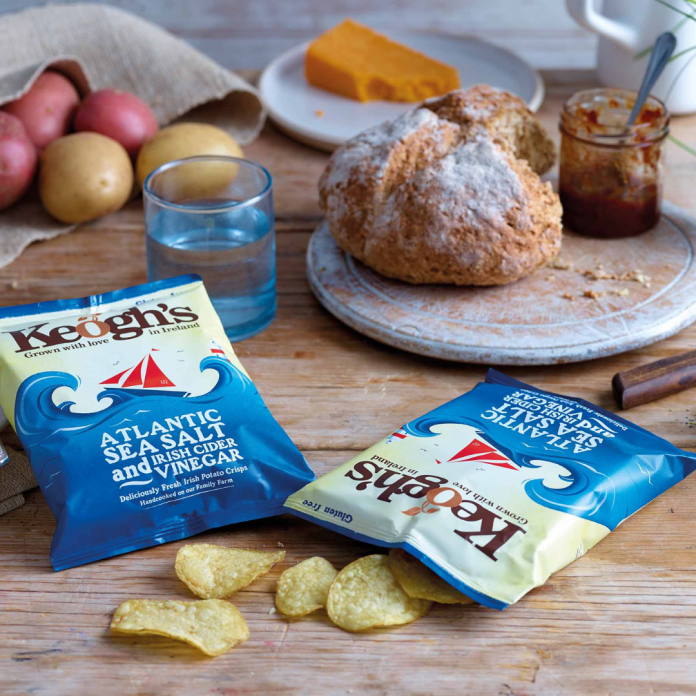 Leading Irish brand Keogh’s Crisps has signed with UK distributor Bobby’s Foods to supply up to 20,000 stores nationwide. The distribution deal with the IB Group member will see the award-winning, premium crisps fly the flag for Ireland in an ever emerging market for the brand, expanding their stockists to a wide range of UK convenience stores such as Co-op, Costcutter and Nisa.

First to launch in Bobby’s Foods will be three well-loved classics from their range – Atlantic Sea Salt & Irish Cider Vinegar, Mature Irish Cheese and Onion, and Irish Atlantic Sea Salt. Grown and hand-cooked in small batches from “crop to crisp” on the family farm in North County Dublin, Keogh’s Crisps’ innovative flavours include a variety of unique and exciting combinations, with distinct local Irish influence, representing the very best of their homeland’s artisan suppliers. Salt is harvested from the wild Atlantic Ocean on the West Coast of Ireland and the vinegars are sourced from David Llewellyn’s orchard local to the Keogh’s family farm.

A relatively new player, Keogh’s Crisps has already won a collection of awards including 22 Great Taste Awards, winner of the Irish Exporters Association’s prestigious Exporter of the Year award, as well as a second win as Food & Drink Exporter of the Year 2022, proving the business is set to go from success to success here in the UK.

The Keogh’s Crisps business has developed a strong reputation as innovators in the Irish food market, being the first food producer to be accredited as a carbon neutral business.