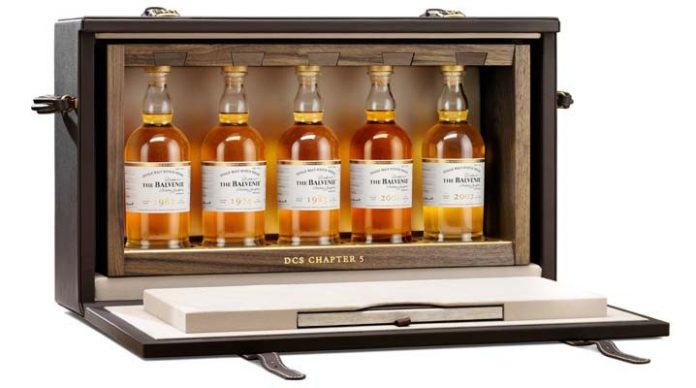 “David’s contribution to The Balvenie’s craft is simply immeasurable, which is why it is fitting that the last chapter of the Compendium should celebrate his 57-year journey with us and some of his most pivotal moments on the path to becoming the industry’s longest serving Malt Master,” said Simon Hunt, chief executive of William Grant & Sons.

Aged between 16 and 56 years, the five rare liquids include the oldest ever whisky to be released by The Balvenie – a fragrant and sweet 1962 that commemorates Stewart’s very first year at the distillery. A luscious 1974 vintage with malty notes of honey and orange peel celebrates the year of his appointment to Malt Master and a 1983, with hints of vanilla and butterscotch flavours, marks the start of his experimentation with maturation.

A vibrant 2001 European oak Fino sherry butt, brings orchard fruit notes with oaky spiciness. Finally, a 16-year-old first-fill American oak bourbon barrel, offering a combination of smokiness, sweetness and spiciness, signifies his involvement in the reintroduction of The Week of Peat at the distillery after a fifty-year hiatus.

“Working for a family company, I’ve been lucky enough to have been given the freedom to make stock decisions based on my preference and vision, with the free rein to pick casks and hold on to whisky, not always knowing what I’m going to do with it, for no other reason than thinking one day it will be extraordinary. For me, this is indulgence in its truest form,” Stewart commented.

The four other chapters in the series has been released annually since 2015.

As with past chapters in The Balvenie DCS Compendium, Chapter Five is presented in a handcrafted frame, produced by Scottish craftsman Sam Chinnery.

Each set has an individual number engraved on the frame, showing it is one of just 50 sets available worldwide. Individual bottles from the set will also be available in a single presentation frame.

Each set is accompanied by The Balvenie DCS Compendium book, written by former Balvenie Global Ambassador Dr. Samuel J. Simmons. The Balvenie is also planning a series of celebratory events throughout 2020 to mark the completion of the Compendium.