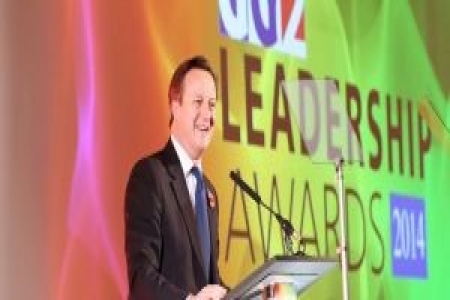 DAVID Cameron became the first Prime Minister to attend the prestigious GG2 Leadership Awards, which celebrate high achievers in ethnic minorities.
Now in their 16th year, the annual GG2 Leadership Awards are hosted by the Asian Media and Marketing Group (AMG), publisher of Asian Trader, Garavi Gujarat and Eastern Eye.
Addressing an 800-strong audience of MPs, captains of industry, millionaire entrepreneurs and leading personalities from the world of arts and entertainment, Cameron pledged to “unleash” the talent of minorities and said he wanted to see an Asian prime minister lead Britain.
“One day I want hear that title Prime Minister followed by an Asian name, though perhaps not immediately,” Cameron said. He added that he wanted to see more Asians and ethnic minorities in government, the civil services and the armed forces.
“When I hear the terms your honour, brigadier general, the right honourable, more often I want to hear it followed by a British Asian name,” Cameron said.
Cameron presented two top awards on the night and in his remarks added: “Tonight is about celebrating all those pioneers and trailblazers – people who have done so well and it is about celebrating the country we have built together.”
He gave the GG2 Man of the Year award to Dr Rami Ranger of Sun Mark Limited, while Dame Asha Khemka, principal and CEO of West Nottinghamshire College, received the GG2 Woman of the Year award.
The Prime Minister said: “Britain will only be the best it can be when all its people are all they can be.” He called for the removal of barriers that stop people getting on, attacking prejudice and celebrating role models.
In all 12 winners walked away with GG2 Leadership Awards on the night.
Also on the occasion, the fourth edition of the glossy GG2 Power 101 was launched – a compilation of the 101 most influential Asians in Britain.
Secretary of state for culture, sports and media Sajid Javid was named the most powerful, followed by last year's topper, the teenager Malala Yousafzai and Labour MP and chairman of the home affairs select committee, Keith Vaz.
The Prime Minister said: “If you're on the Power List, you have the power to inspire. If you're nominated for an award, you can encourage others to follow your lead.”
In his remarks, AMG's group managing editor Kalpesh Solanki said: “Tonight we celebrate and recognise achievement of exceptional individuals who have excelled and broken through barriers. Their triumph through adversity makes them remarkable people who deserve to be recognised.”
He added: “There is an important and positive side to immigration which we should be celebrating and talking about.
“We must remember immigrants create jobs as well. From the Asian Rich List we have businesses that collectively employ millions of people, pay billions in taxes and have become great corporate citizens.”
Winners on the night included a leading human rights campaigner, a blind trader in the City, flight lieutenant Rakesh Chauhan, who received a posthumous award and BBC presenter Nihal Arthanayake.
India's high commissioner to the UK, Ranjan Mathai, MPs Priti Patel, Anas Sarwar, Simon Hughes, entrepreneurs Bharat Shah, Bhanu Choudhrie, T Ramachandran, singer Jay Sean, actress Preeya Kalidas, Great British Bake Off star Chetna Makan, BBC presenters Manish Bhasin and Sangita Myska were among those in the audience.
Guests were entertained by the Patrick Alan band, and they also gave generously to the British Asian Trust, which helps underprivileged children in India get an education.
The GG2 Leadership awards are sponsored and supported by Karali, HSBC, Sun Mark Limited, Asda, Sun and Sand Group of companies, Hearst Magazines UK, Bank of Baroda, Auden Mckenzie, Daily Mail, Waitrose and Royal Navy.
Winners are chosen by a panel of judges who include Patricia Hewitt of the UK India Business Council; Yasmin Jetha of Bupa; Terry Mansfield CBE of Hearst Corporation; Barry Gardiner MP, Michael Fuller, Chief Inspector of the Crown Prosecution Service and Shailesh Solanki, executive editor of AMG.