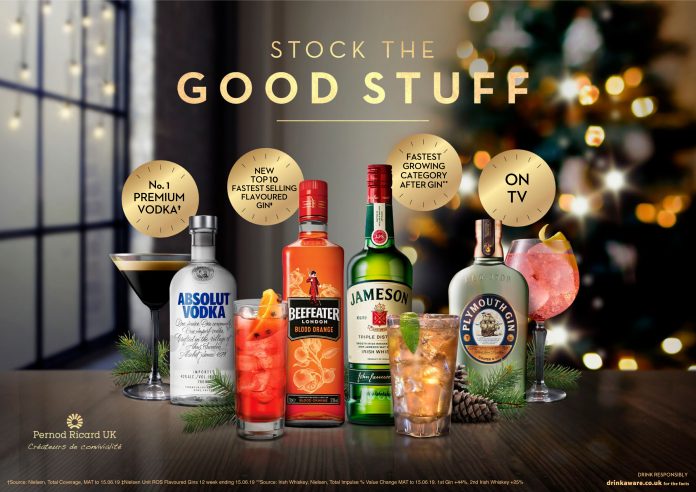 Pernod Ricard UK is urging convenience retailers to give stronger visibility to premium wine and spirit brands this Christmas in order to win back share from grocery and capitalise on the £15.5m opportunity available to them.
The convenience channel increased its value share of premium spirits by +3% in the last quarter of 2018, compared to grocery which grew share +8%, and even lost 1% versus the previous year, widening the gap and losing valuable share during a crucial sales period (Nielsen).
Within premium spirits, Pernod Ricard UK recommends retailers focus on five key categories: gin, Irish whiskey, blended scotch, vodka and wine. These categories lend themselves to two key consumer drinking occasions at Christmas: giving the perfect gift and being the best hosts at home.
To drive awareness of these categories and propel consumers into store, Pernod Ricard UK is also increasing its above the line advertising spend by 38%, with campaigns going live from October for Jameson, Plymouth, Chivas and Campo Viejo. This contributes to an overall investment in the Christmas occasion of more than £5m, nearly 70% more than last year.
Consumer behaviour at Christmas is changing, with more households, each buying more products, visiting convenience stores (Nielsen). During these shopping trips, people are buying less products but spending more and the leading premiumising product is spirits (Him!).
Consumer confidence declined in 2018, reaching a low at Christmas, meaning more people spent time entertaining friends and family at home. Home meal occasions, for example, were up +752m and dinner parties +38m in 2018 versus the previous five years (Kantar). This has contributed to the rise of consumers wanting to re-create their favourite cocktails and mixed drinks at home, with Google searches for the Espresso Martini up 156% over the last three years.
The average spend on premium wine and spirits builds over the festive period but growth happens later in the month of December for convenience, as opposed to grocery and the on-trade, and the key to growing sales is encouraging sales of premium spirits earlier in the month, says Pernod Ricard.
Chris Shead, Off-Trade Channel Director for Pernod Ricard UK, comments: “It was a good Christmas for the convenience channel last year, however, it continued to fall behind grocery as retailers failed to maximise the Premium Spirits opportunity. The data all points towards a third Gin-dominated Christmas this year, however, we also anticipate this year to be driven by gifting outside of traditional categories, such as Gin and our new Plymouth Gift Box, as well as lead-ingredients for popular cocktails and mixed drinks. That’s why we are investing significantly this year to encourage more moments of conviviality, to get consumers spending more time with family and friends, as well as more money in the convenience channel on premium wines and spirits.”
Pernod Ricard UK’s gifting range includes Plymouth Gift Box. 44% of UK consumers gave gin as a gift last year and to capitalise on this growing trend, Plymouth, which is growing +6.1% (Nielsen), has been given a premium gift box suitable for gin lovers looking for a British-made, craft gift. The gift box will be available from November at an RRP of £26.69.
Scotch is a traditionally gifted category and Chivas, the number one premium blended whisky in the UK (June RQ), has the perfect range to encourage trade-up as its taste falls somewhere between a Single Malt and a Blend. Pernod Ricard UK recommends merchandising the full Chivas range (Chivas 12, Chivas Extra, Chivas XV) on the top shelf, with Single Malts and Jameson Irish Whiskey on either side.
Premium wine volume peaks at Christmas, as consumers buy slightly more and look to trade-up. Campo Viejo is the UK’s number one red wine, while Brancott Estate is the UK’s number two white wine.
Flavoured gin is driving 58% of the sales value within total gin (Nielsen), so Pernod Ricard suggests retailers make sure it is visible on the middle shelf from the end of November through to New Year’s Eve. Stocking tonic in close proximity and offering garnishes, such as strawberries and oranges will encourage increased basket spend, the company suggests.
Irish whiskey is the second fastest growing category behind gin and is gaining momentum due to the decline of American whiskey, with Irish whiskey growing 10 times faster than American over the last two years (Nielsen). Over 49% value growth is forecasted between now and 2023, and so should be given prominence on the top shelf next to single malts and premium imported whiskies.
From mid-December to New Year’s Eve, more and more consumers will be looking for at-home cocktails and the Espresso Martini is a top 10 cocktail consumers want to re-create at home, with one in three households now owning an espresso machine. Stocking Kahlua next to Absolut will drive incremental sales, Pernod Ricard says, with 15% of Kahlua shoppers already purchasing Absolut.