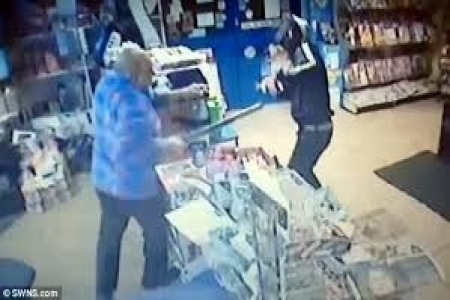 A RETAILER lost part of his finger when he fought off a machete-wielding raider who tried to rob his shop.
Muhammed Maqsood told the masked thief to “cool down” after the man had demanded he hand over cash from his corner shop in Eden Vale, Sunderland.
The robber confronted the 63-year-old shopkeeper, known as Max, while he was looking at paperwork early one Saturday morning, threatening him with the sword and striking him three times with the blade.
After Max grabbed a shutter pole and hit him on the shoulder, the robber ran off.
Max, who has run the Max and Sons shop for 32 years without incident, said: “He was telling me ‘give me the money, give me the money’ and he showed me the big knife, which was 3ft long.
“I went to the counter and said to him ‘cool down’ and he followed me. I said ‘look, that’s where we put the money.'
“I slipped back and he took my nail off and got me on the arm.
“I took the stick. He got me three times, but I used it twice and got him once on the shoulder and he ran away. It was a shock and I’ve never done anything wrong to anybody, but I feel like I had a guardian looking out for me.”
Max was left with a bleeding middle finger on his left hand after the sword cut off the nail.
The injury was treated by a paramedic and Max was left with bruising to his arm.
Officers have described the offender as white, 5ft 8in to 5ft 10in tall, and slim-to-medium build.
He was wearing black bottoms, a black top with two white stripes down each sleeve and a small motif on the left side of the chest, he had a grey-hooded top underneath the black jacket and a black mask pulled down over his face.