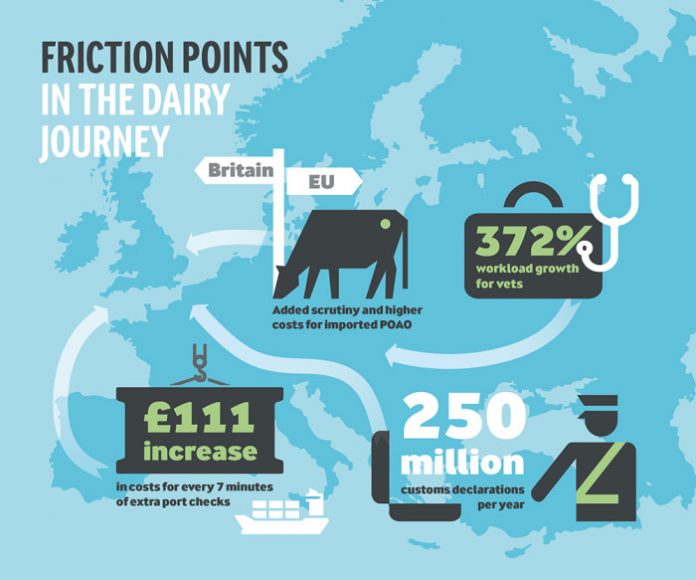 Arla Foods has warned that non-tariff barriers to trade and restricted access to labour after Brexit will leave British consumers facing a dairy dilemma which could see the availability of butter, yoghurts and cheese become restricted.

Commenting on a report by the London School of Economics (LSE), The Impact of Brexit on the UK Dairy Sector, it said any friction and any limitations on access to key skills, as is identified in the report, will mean that UK consumers pay the price through less choice, higher prices, and potentially lower food standards.

The Government’s White Paper on the UK’s future relationship with the EU sets out proposals to ease trade with Europe. But this is still to be agreed with the EU, noted a statement from the country’s leading dairy company.

Arla Foods said that the issues identified in the LSE report mean a dairy dilemma in the UK, with three possible outcomes:

This is in addition to costly impacts throughout the supply chain, problems that could be exacerbated by a shortage of vets, lorry drivers and farm workers post-Brexit, it added. UK has the second largest dairy trade deficit in the world, at up to 16 percent and 98 per cent of the dairy imports are of EU origin.

“Our dependence on imported dairy products means that disruption to the supply chain will have a big impact. Most likely we would see shortages of products and a sharp rise in prices, turning every day staples, like butter, yoghurts, cheese and infant formula, into occasional luxuries. Speciality cheeses, where there are currently limited options for production, may become very scarce,” said Ash Amirahmadi, managing director, Arla Foods UK.

Arla Foods UK, part of a pan-European cooperative owned by around 11,000 farmers, has previously noted that a hard Brexit without a trade deal could have a disastrous impact on this country’s dairy industry and its consumers.

Amirahmadi continued: “The farmers that own the Arla dairy cooperative already balance keeping consumer prices down with maintaining quality and the best standards, including high animal welfare. There’s no margin to play with here in the value chain. Any disruption means that if we don’t get the practicalities of Brexit right we will face a choice between shortages, extra costs that will inevitably have to be passed on to the consumer or undermining the world-class standards we have worked so hard to achieve.”